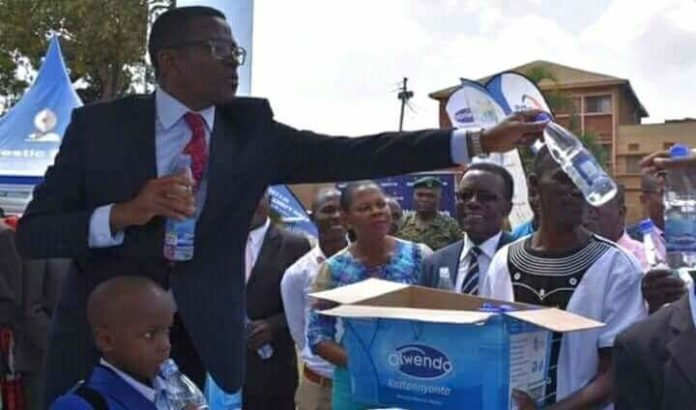 Last week, Buganda Kingdom Launched a new bottled water project-Olwendo, the Katikkiro Charles Mayiga said, this is part of the several ventures that the once mighty kingdom is looking at for resource mobilization.
Mayiga said on top of other requirements for the traditional introduction ceremony in Buganda, Olwendo-Kattannyonta, will be compulsory for dowry.


The kingdom has in the past started several projects with little success. Some have failed [collapsed] others are struggling and few can be said to be doing well- a case of Central Broadcasting Services.
Some of the projects the kingdom has launched in the recent past include: Teffe Bank, K2 Telecom, CBS FM, BBS TV, Ngule Lager, Mutesa 1 University among others.

Will Olwendo survive in competitive market?
Olwendo faces still competition from well established brands. There are over 70 mineral water brands on the market competing for the same market .Besides the brands you see in town, there are several brands up-country whose distribution does not go beyond a district or region. So which customers does Olwendo target in an already saturated market?

To survive in this market, sources who are familiar with the industry say, some players are said to be bending the quality control rules so as to survive at the cost of the customer’s safety.
We wait to see the strategy the Kingdom will deploy to make Olwendo a leading brand otherwise its tough one.
Given the past experience, we don’t see Olwendo succeeding in an already saturated market. The kingdom has in the past performed poorly at project execution, and the examples are not hard to find.


Muteesa 1 Royal University
Founded in 2007, Muteesa 1 Royal University was seen as another opportunity to revive the kingdom’s glory by offering the kingdom subjects relevant education at affordable fees. Nine years later, it is increasingly becoming evident the university will never realize this vision.
The University has had four Vice-Chancellors in nine years, a clear sign of a tough working environment. At one time, the students locked the Vice-Chancellor in the toilet. The university’s problems are said to be partly a result of the infightings at Mengo.


The MRU is said to highly in debt, with nothing that equates it to the 21st century University. The University buildings are dilapidated, owes millions of shillings to URA and NSSF. According to a recent report by the National Council of Education, the quality of education offered at MRU is said to be wanting.


K2 Telecom
At the launch of K2 Telecom in 2012, the Kingdom network promised a new era. With over eight million Baganda, the network was destined for success. Six years later, the network has been shut down and taken over.

K2 was recently absorbed by Airtel Uganda after it was shut down for failure to pay taxes [ Pay as you earn and excise duty] worth Ugx. 94.8 million Over four years. K2 failure is largely lack of clear strategy and understanding of how Mobile Virtual Network Operator operates-which raises questions on team selection.


Ngule, BBS tv
January 2016, Buganda Kingdom partnered with Uganda Breweries Limited to manufacture the Kingdom beer -Ngule. The project was described as a move in the right direction as Katikkiro seeks to breathe life into the glory of Buganda Kingdom.
Two years later the beer is said to be struggling. While launching the Ngule Beer, Katikiiro Charles Peter Mayiga said the beer will be used on all Kingdom functions including introduction ceremonies. However, so far, on most Buganda functions, Eager Beer is till the favorite. What could be the problem? – could it be a distribution or ‘defiance?’

April 2016, the Kingdom yet again launched another project, BBS Terefayina, two years later, the station is not anywhere near to the top watched stations even in the central region.
Why do Buganda Kingdom projects fail?
Analysts say the Kingdom, has all it takes for her projects to flourish, but what usually fails her businesses is the poor business model and execution.
This, according to analysts is because the kingdom sometimes fails to take on professionals to run these projects. Yet, the kingdom is ranked as among the top regions with highly qualified, highly trained and experienced people in nearly all fields. Sorry to say that they have not tapped into this huge resource.


Will Buganda Kingdom ever regain her glory?
When Charles Peter Mayiga, was appointed Katiikiro a few years ago, the passionate Mayiga declared that his mission was to ensure that Buganda regains her past glory. It is evident, the Baganda and the Buganda kingdom power, and influence is slowly and gradually disappearing.

read:Capital FM, CBS FM; the most listened to radio stations in the Central region-report

Unlike his predecessors, Mayiga is a man of action who chose development as opposed to politics. The Kingdom has achieved so much in the little time he has been Katiikiro.
Regrettably, some officials at Mengo are reportedly working towards his downfall.
Analysts point out that if the enemies of Baganda successfully manage to bring down Mayiga, this might be lost golden opportunity for Buganda to return to glory.


Mayiga has been described as one of the exceptional Katitkiro’s Buganda Kingdom has had in the recent past.
Already the kingdom seems to be trailing on a number of fronts.
According to Presidential advisor on media and Buganda Kingdom critic, Tamale Mirundi, ‘‘The once prominent Baganda Politicians are no more: Nasser Ntege Ssebagala, Ken Lukyamuzi, Prof. Gilbert Bukenya, Beti Kamya, Erias Lukwago etc are no more’’
Back then, the Baganda commanded Uganda’s political space: Benedcito Kiwanuka, J.W Kiwanuka, Ignatius K. Musaazi, Abu Mayanja, John Kakonge, William Kakonge among others.
As Tamale Mirundi points out, today the top leadership of Uganda’s main political parties (National Resistance Movement, Forum for Democratic Change) to some extend the Democratic Party and Uganda People’s Congress are commanded by other regions. The Baganda have been relegated.


Business
Back then, the Baganda commanded a sizeable percentage of Uganda’s rich class. They owned huge chucks of land, large coffee and Banana plantations. The Baganda were also into transport, markets, exports and import trade. All this is now history
It is also true that while other tribes will come together to help a colleague that is not possible with the Baganda. There is this saying that a typical Muganda will always work towards bringing down a successful colleague.


Quick money mentality
Somehow, the Baganda have lost the hardworking spirit for quick money. This has forced many Baganda especially the, youth to sell inherited land to buy boda boda’s. A simple survey reveals that most youth on Kampala streets, including those riding Boda boda’s, gamblers, are Baganda who have sold their parents’ land to come to Kampala. It is also true most of the land in Buganda has been sold to non Baganda who have set up, farms and other investments.

read:The looming Cabinet Reshuffle: surprises in the next cabinet, Ministers who may face the axe

With the infighting at Mengo, the seat of Buganda Kingdom, mistrust among Baganda, the Baganda selling off their land, Baganda Youth shunning education for gambling and boda boda, it might require divine intervention for Buganda to regain her past glory.