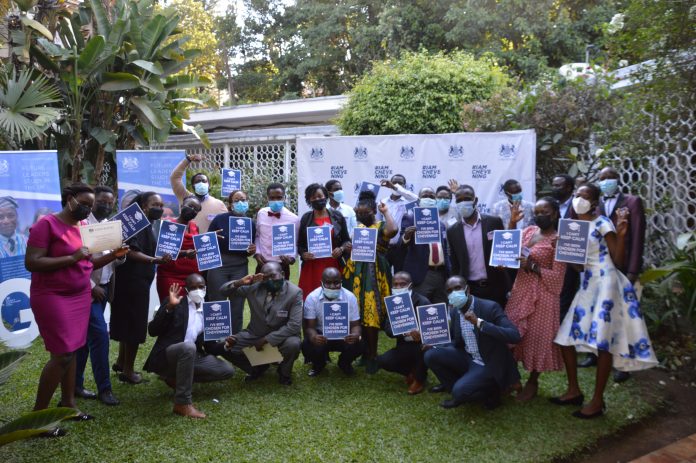 On 26th August 2021 British High Commissioner to Uganda Kate Airey OBE hosted the 2021/2022 Ugandan Chevening scholars to congratulate them and bid them farewell before they embark on their one year scholarship in the UK.
This year Uganda is sending 24 scholars to the UK, the highest contingent of scholars since the start of the scholarship programme.


Chevening is the UK government’s international scholarship scheme and has been running since 1983. It offers a fully funded one year master’s degree in any field at top class UK Universities and is aimed at developing global leaders. Since its inception Uganda has produced over 270 Chevening beneficiaries and now has an active Alumni association.
This year’s Chevening send-off event was an opportunity for the scholars to meet each other and members of the British High Commission and prepare themselves for their year in the UK.

In her remarks to the scholars British High Commissioner to Uganda Kate said ‘You should count yourself as some of the brightest minds in your respective fields. The Chevening programme produces future leaders and the reason you were chosen is because we believe in you and see the potential you have to make a difference to Uganda. I look forward to hearing about your adventures and plans on your return to Uganda’


Scholars also had the chance to meet Chevening Alumni Association of Uganda Chairperson Helen Nanteza Kawesa, who is also the Deputy Editor of the Hansard at the Parliament of Uganda who talked about her experience as a Chevening scholar and the importance of making the most of the time in the UK, before returning to Uganda to effect positive change and support Uganda’s development.


The Chevening application period for academic year 2022/2023 is currently open and will close on 2 November 2021. The scholarship offers full financial support to study for any eligible master’s degree at any UK university, whilst also gaining access to a wide range of exclusive academic, professional, and cultural experiences.