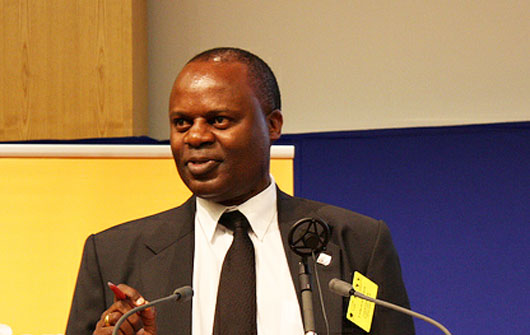 Bank of Uganda has frozen five bank accounts of Action Aid Uganda, following police investigation of alleged money laundering. All the account where with Standard Chartered Bank.
The accounts are in Ugandan shillings account, US dollar, pounds sterling and two Euro accounts.


In a letter dated 3rd October 2017, directed to the managing director of Standard Chartered bank, Louis Kasakende, the BoU deputy governor Bank of Uganda explained that the Criminal Investigation Directorate (CID) of the police is investigating Action Aid International Uganda for alleged conspiracy to commit a felony and money laundering.
Pursuant, to section 110 of the Financial Institutions Act, 2004, Kasakende directed the bank to freeze all the listed accounts. 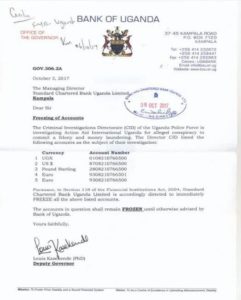 “The accounts in question shall remained frozen until otherwise advised by Bank of Uganda,” reads part of the letter.
Last month on September 21, police raided ActionAid Uganda offices in Kampala, where they conducted a cordon and search operation. Police accessed and searched computer accessories, mobile handsets, money transfer related documents and bank related transaction documents where they carried some.

The police raids came at the height of protests against plans by the NRM to change Article 102(b) of the constitution that put a cap of 75 years on the presidential age. this would enable president Museveni who is also the party chairman to stand for 2021 presidential. The president recently celebrated his 73rd birthday.


Ofwono Opondo recently said the “sporadic demonstrations in universities and towns are paid for through ActionAid, adding that the disruptions being organized by the opposition led by Dr Kizza Besigye and funded by ActionAid among other CSOs will fail miserably. We are breaking down their networks across the country.


Responding to closure of their accounts Action Aid Country Director, Arthur Larok said: Anyone with the slightest of understanding and knowledge about ActionAid’s work would know that the reality cannot be any further from the truth.
He added: ActionAid Uganda will be releasing an official statement as soon as possible. In the meantime, we would like the public to treat the allegations against ActionAid with the contempt it deserves