Home Politics Bobi Wine: We have evidence the people witch hunting us are funded... 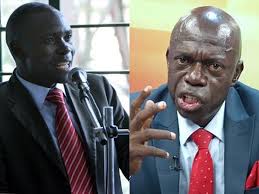 I invite Ugandans to read Dr. Olive Kobusingye’s book, the Correct Line, and Daniel Kalinaki’s Kizza Besigye and Uganda’s unfinished revolution.
You will understand the character and nature of [president] Yoweri Museveni, the man who has ruled over their nation for the last 35 years.
Ever since I announced plans to run for president in 2021, they are in fact a pattern of repression and suppression against anyone who has dared to rise up against the regime.

That is how Museveni fights- like all cowards.
The first attempt of dictators throughout history is normally to bribe and co-opt their opponents. They rely on intimidation and violence to suppress voices dissent against them.

If God grants me an opportunity in future, I will give details of how many people the regime sent to me in a space of one week after the Kyadondo elections, to give me part of their stolen billions in order to silence me!
It was after I had made it clear that I was never going to be compromised that they changed tactic and came with full force.
Aside from compromise and violence, one of the most compelling tools employed by dictators is the law!
Right from the apartheid regime in South Africa, to the Mugabe rule, to Gaddafi, Bashir, Hosni Mubarak and others- dictatorships use the law as an instrument for oppression.


Ever since we started the People Power Movement, the regime has deployed the law in its full force to fight us.
In Arua, a part from charging me with possession of machine guns before a military court (guns which later disappeared in thin air), I was charged with treason, annoying the president, and many other ridiculous charges. They even claimed that we had broken a bullet proof car screen with a stone.
Later on, I was charged with protesting against
the social media tax. I am out on police bond in respect to more than 20 other incidents.
Sometime last year, Uganda Revenue Authority issued me an embarrassingly high tax demand in respect to transactions I did many years back. You will all recall that last year, I together with other leaders of People Power were sued in the Constitutional Court for operating the People Power Movement!
The cases against me personally have been numerous. The regime has deployed people to file a case claiming this very land where our office is in Kamwokya, another case claiming Magere where my house is, and another case claiming Busabala One Love Beach!


I have owned all these properties for more than 10 years and no one had ever come up to complain – until I decided to take on [president] Museveni! Any sane person would understand the motivation!
Recently, when we officially launched the National Unity Platform political party, some imposters came up claiming that we took over the leadership of the party illegally.

As ridiculous as it sounds, the same people who appeared before the press with forged membership cards went on to file a case without the cards they brandished before the press. This time, they claimed that the party previously never issued membership cards! Since this matter is before court, I will not go into its details because that would be sub-judice. But you can just imagine the lack of shame!
We have concrete evidence of which state operatives have been facilitating them, at the expense of the tax payer.


What gives me hope is that these desperate attempts have failed in the past and they will fail now.
Dictators use these tricks to divert opponents, embarrass them and detract them. Every day you spend in court, the regime uses that time to steal more money and entrench itself further!
Whenever the regime has wanted to deter its opponents, some Ugandans have availed themselves to be used as tools.
For Doctor Besigye, it was the Kyakuwas, the Kiziges, the Gilbert Arinaitwes, the Byabakamas etc. For me, you have seen them already and the list is still growing.
When I first ran in Kyandondo, you all remember how the regime and its sympathizers did everything to attack my morality. Too bad for them, it did not stick but they have never given up. Now they are seemingly challenging my credentials and desperately trying to cast me as dishonest.
To be clear, in a functioning democracy, leaders should be put on the spot and called to question. No leader should be above scrutiny, and in fact our struggle is meant to promote a culture of accountability by leaders at all levels. But from the pattern I have explained above, this is no quest for accountability. This is witch hunt.


What Museveni has mastered is the art of deploying tools to help him witch-hunt his opponents.
I have lived most my life in the camera. There is nothing I have not spoken about publicly, including the question of my age and my academics.
Countrymen and women, fighting a dictator is no simple task. You lose friends. You are stabbed in the back. You are persecuted. You are prosecuted. You are slandered. You are maligned. You’re embarrased. You are threatened. You are attacked from every corner and by every tom, dick and harry.
While you are fighting for the oppressed, the dictator uses some of the oppressed people to oppress you.
While you are still dealing with this, the regime brings that. As you conclude one battle, the regime is manufacturing ten more wars. If you are not careful, you can easily faint and give up. But you must persevere. You must keep your focus. You must not lose your head.


You must know that out there are millions of people who look up to you. You must keep going. These are the lessons I have learnt from Dr. Kizza Besigye; from Nelson Mandela; from Malcolm X and from Martin Luther King Jr and I hope that the ghetto people out there are learning lessons from my experience while am still alive.
Dictators have no shame. Their tools too, have no shame.
My wife and I have been left in so much wonder seeing some of the people who were very close to us, who we helped so much and those who helped us, turning around and do unbelievable things against us. We sometimes watch in utter shock as some of the people who were previously closest to us say incredible lies about us. But that is life.
We have come to learn the kind of mission we took on and I encourage all comrades to brace themselves for more heartbreaks. That is the cost of fighting for freedom, But we shall eventually win.


I am aware that several lawyers and private individuals have written asking for information regarding the academic papers of President Museveni, his wife. You have already taken a much longer time to respond to their request than the time you took to release my academic papers!
I am challenging you to release them with the same urgency since you claim to be acting within the law and independently.


Ugandans want to be sure that indeed, President Museveni has the qualifications he claims to have, that he was born when he claims to have been born and that he is in fact a Ugandan, this is a debate that has raged on for years.
Ultimately, we shall overcome!

editor’s note: a slightly edited STATEMENT BY HON KYAGULANYI SSENTAMU ROBERT ON THE CONTINUING EFFORTS BY THE REGIME TO DETRACT US, DISCREDIT US AND DETER OUR MISSION TO FREEDOM.