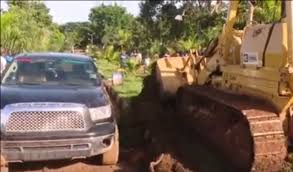 
“Bobi had been warned several times not to plant grass and trees beyond his official beach but he refused. This particular piece of land was even blocking access to other people’s land. The land lord had the right to stop Bobi Wine’s impunity and ensure that other people who own land in that area have access”.

He further revealed that Bobi Wine didn’t pay any single coin for this land and he has been there illegally.
“There is no money that Bobi Wine paid for this part of land he was illegally occupying. However, Bobi Wine can go to court and seek redress” Denis Jjuko noted in the post.


Bugaya Dennis, the spokesperson for Buganda Land Board also denied any involvement in demolitions of Bobi Wine’s beach. “Buganda Land board is not involved. Bobi wine knows it. That’s why in his statement he is not accusing Buganda Land Board at all. We have worked with him and we have supported him as an organization. But I think he is having wrangles with other tenants. It’s his obligation to tell the public the entire truth though”, he posted on social media


Bobi Wine decried the manner in which part of his beach was demolished noting that , “It is very unfair. I bought that land….I paid all the people who were on the land and have been developing it for the past five years. Today I saw a grader destroying all my developments without notice. It is an injustice by my own to their own, but I have to face it and know that will pass. I will not pursue it any longer,” Bobi Wine told NTV.