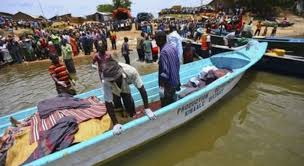 
In December 2016, more than 40 people drowned in Lake Albert on Christmas Day as they travelled to participate in a friendly football match.
‘’A strong wind started blowing up waters shortly after the boat set off from the landing site. The coxswain attempted to return to the landing site when the winds started blowing but the boat capsized’’ Sadic Nyangireki, the Nyakabingo Parish youth chairperson rold the Daily Monitor,


The footballers and fans that set off amid joy, singing and drumming were plunged into panic when the boat was being blown by winds moments before the accident, witnesses said.
20 people were instantly rescued. The search efforts are still underway
Some of the deceased have been identified as only Bob, Fisto, Jango, Ayera, Majid Mayaya, Omirambe, Bondhe and Opakrwoth. Others are Dhebaba, Nyayenga,Winnie, Kothu and Anifa.

Some of the survivors are Emmanuel Ageno 20, Jalum Oakani 22, Sara Maurine 24, Rose Chikawun 18, Kenneth Twesige 20, Madithrwoth Thie 18 and Godfrey Alimula 22. Other are Zawadi Rundi 20, Warom Oyirwoth 27, Mubaraka 19, Damas Oyirwoth 18, Oyergiu 16, Oringi and Asumani among others.
the worst incident on Lake Albert happened In 2014, at least 98 bodies were recovered and 41 rescued after a boat carrying as many as 250 Congolese refugees capsized. The refugees had been living in Uganda’s Kyangwali settlement and were heading back home