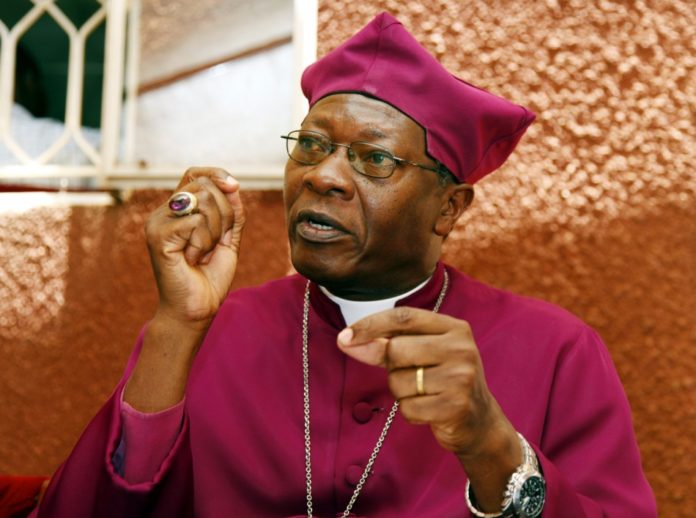 
No one was hurt and the motive of the attacker remains unknown. Police have identified the attacker as 35-year-old Herbert Kaddu from Makai, Rubaga Division.
In the short video being circulated on social media, the man, clad in a back-cloth armed with big stick is seen running very fast towards the Holy Altar and diving in, where the Bishop was and his other two colleagues. Security was quick to take to action. Men in uniform and those in plain cloth quickly moved in to arrest, and whisked off the ‘attacker’.

The suspect is currently in police custody at Namirembe Police Post for interrogations.Bishop Wilberforce Kityo Luwalira of Namirembe Diocese said his attacker looked possessed and couldn’t be stopped.
“I have seen the power of darkness during my service as Bishop but the most powerful thing is that I have seen the power of God,” said Luwalira told the congregation after the incident.


He said they can’t blame security officers attached to the church since such incidents happen to even to high profile people with heavy security.
Meanwhile, at Rubaga Cathedral, Archbishop Cyprian Kiziro Lwanga cautioned Christian Believers against misleading new denominations and churches that have turned faith into a money minting business by selling even things that come free from God


At Pastor Augustine Yiga’s Revival Church in Kawala, everything is holy and on sale.These items are sold for some good money.
It is understood that the controversial pastor of the Revival Ministries in Kawala, a Kampala Suburbs is yet again in another awful gimmick for publically selling ‘holy’ bread Holy tea and holy calendars. Famously known as Abizayo, the pastor claims these items provide miracles to whoever purchases them.

The Archbishop re-echoed own message to president Museveni on people from different security institutions who give him misleading information. Adding that these bad people have even infiltrated the church. He urged the informers to stop lies. The Archbishop condemned the increasing mysterious murders and land grabbing Says culprits should use Easter opportunity to repent because they’ll also die at some point