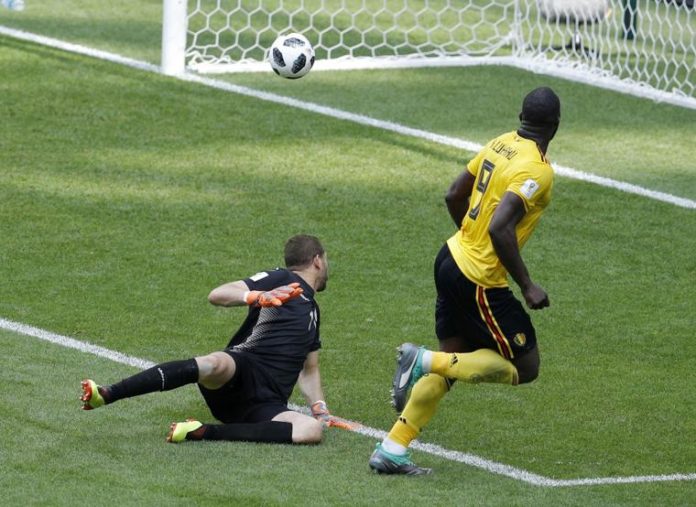 Romelu Lukaku and Eden Hazard both scored twice as Belgium strengthened their lead above England at the top of Group G by crushing Tunisia with a devastating attacking display.
Belgium attacked from the off and needed only five minutes to take the lead, when Hazard was barged over by Syam Ben Youssef just inside the box and got up to send Tunisia keeper Farouk Ben Mustapha the wrong way from the spot.


Things quickly got worse for Tunisia when Ali Maaloul’s heavy touch on the halfway line allowed Dries Mertens to nip in and release Lukaku, who found a perfect low finish.
Is this the miss of the World Cup so far?
The North African side, needing a win to reignite their own hopes of progress, gave themselves hope when Dylan Bronn got on the end of Wahbi Khazri’s whipped free-kick just 109 seconds later.
But they could not compete with Belgium’s vastly superior firepower and Lukaku gave the Red Devils breathing space once more with a dinked finish from a Thomas Meunier pass just before half-time.

Hazard added his second goal soon after the break, racing on to a precise Toby Alderweireld pass and rounding the keeper to fire home.
That made sure of the points, but Belgium were not finished yet.
Substitute Michy Batshuayi, who also had a shot cleared off the line and hit the bar from close range, finally found the target from Youri Tielemans’ cross.
Tunisia did manage a late consolation, when Khazri swept home Hamdi Nagguez’s cross but, unless Panama beat England, they will become the third African team to be eliminated, leaving Nigeria and Senegal to carry their continent’s hopes in this competition.


Tunisia can start planning their trip home
Tunisia showed far more attacking intent than in their defeat by England, and did not struggle to create chances in a wide-open game.
The Carthage Eagles had 16 shots, with five on target, compared to just one out of a total of four efforts against the Three Lions.
While the jubilant Belgium fans were singing ‘please don’t take me home’ long after the final whistle, the Tunisia players can start thinking about their return flights from Russia.


‘We apologise to the Tunisia fans’ – the reaction
Tunisia coach Nabil Maaloul: “As expected, it was a very difficult match.
“Ever since we were drawn into this group we knew Belgium were going to be a tough opponent. We would like to apologise to the Tunisian fans who were numerous in the stadium today.
“However, we did our best and we will try to improve our performance in the future.”