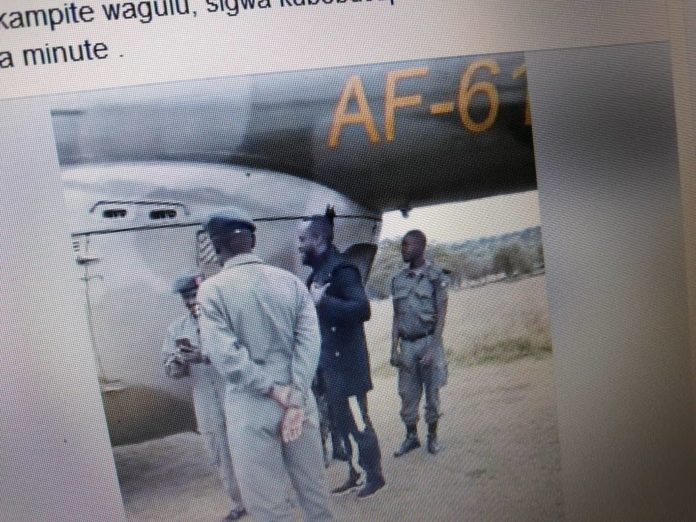 Big Size Bebe Cool was among the artists lined up to perform at Gravity Omutujju’s ‘Embuzi Zakatuude’ concert at Lugogo.
Several fans came in large numbers at Lugogo to [perhaps] witness how the crowd would react to the singer’s presence on stage, following the ugly scene at the Swangz Avenue All Star Concert.
However, Bebe Cool missed the show.


In a Facebook post, Bebe Cool says, he had an urgent meeting with president Museveni. Accompanied by Catherine Kusasira, the singers were flown in a presidential military chopper to Rwakitura.
‘ ‘Congratulations my young brother Gravity, sorry I missed the performance because I had an urgent/important meeting with JAJJA [ President Museveni] of the nation, But am glad it was a success, so was my meeting.’’ Bebe Cool said.

Bebe Cool did not give details of their discussion with the President, which he only described as “urgent.”
“The president sent greetings to you his grandchildren and he says he loves you,” the jovial Bebe Cool in short video said on board the Presidential chopper
“He told me to tell you to be patient and calm,” he said, adding, “The message you (the youths) gave me, I delivered to the president. Rest assured that all your concerns will be worked on.”


Meanwhile, Bebe Cool hinted on his impending visit to the family of Yasin Kawuma, the driver of Mr Bobi Wine who was shot dead in the Arua last month as well as that of the recently murdered police officer Muhammad Kirumira.
Although he didn’t reveal whether or not the President gave him support to take to these families, Bebe Cool said Museveni had both families at heart.


Bebe Cool went to Rwakitura with singer Catherine Kusasira of the Golden Band, as well as a few of members of both artists’ crews.
Shockingly, when asked to wave to the fans, one of the Gagamel managers, a one Amina, first displayed the FDC sign, before speedily changing to NRM party sign.