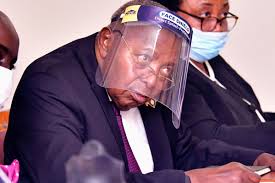 Bank of Uganda on Monday said that the provisional data shows the country’s public debts as of end of April 2021 stood at 66.1 trillion shillings (18.9 billion U.S. dollars), up 15.1 percent from June 2020.
The central bank, in the state of economy report June 2021, attributed the increase to a 33.6 percent growth in domestic debts.


“Public external debt also grew, by 13.0 percent largely attributed to the disbursement of loans by multilateral and bilateral creditors,” said the Bank of Uganda.
The central bank said the ratio of debt service to tax revenues is projected to average 30 percent between financial year 2020-21 and financial year 2024-25. During this time period, a continuous increase in debt service costs may crowd out other priority spending.

“The recent increases in direct monetary financing of fiscal deficits raise additional macroeconomic risks. However, even with the increased fiscal deficits, public debt is sustainable and below the East African Community macroeconomic convergence threshold,” said the bank.
The bank explained that incurring large deficits now for the necessary investments in people, communities, and businesses should increase the chance for a strong, widely shared economic recovery and thus contribute to more rapidly shrinking deficits in the future than the case without such actions.


The Bank of Uganda said the second wave of COVID-19 infections and its scarring effects suggest that adverse impact on the economy could become worse before it gets any better.
Xinhua