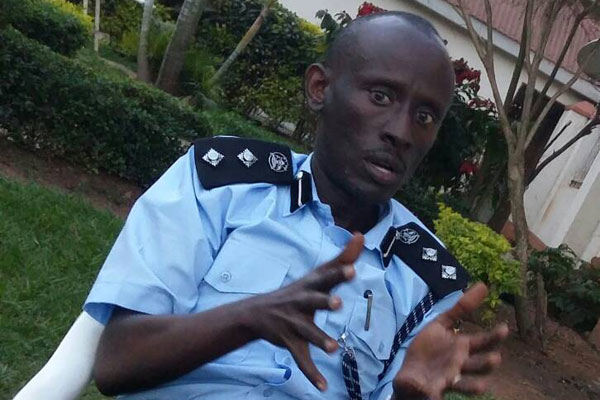 
The Police fraternity is mourning the death of the Commandant of Aviation Police Assistant Commissioner of Police (ASP) Caleb Mwesigye.
Major Gen. Muhoozi Kainerugaba described the deceased as ‘ ‘ a highly disciplined and hardworking young man.’’
Police spokesman, Asan Kasingye, confirmed his death adding that had been in intensive care unit at Nakasero hospital for more than two weeks.


The deceased passed on Tuesday morning. He was transferred to Nakasero when his condition worsened.
Mwesigye 37, has been on the wanted list by the Police Flying Squad for his alleged involvement in the 85kgs cocaine (worth Ugx. 13bn) scandal involving Aviation Police.

He was one of the eight police officers implicated together with the Commandant of the Very Important Persons Police Unit-VIPPU, Dodovico Awita for tampering with the cocaine exhibits.


Lodovic Awita who was the former head of the narcotics department in the Uganda Police Force was arrested recently alongside 5 other senior police officers by a team from the Police Flying Squad.

Police spokesperson Asan Kasingye confirmed the arrest but refused to divulge where the suspects were being held. However Flying Squad source confirmed that Awita and the other officers are currently locked up at the dreaded Nalufenya.


The other officers were prime suspects in the theft of over Ugx.13b seized cocaine stolen in 2015. The Cocaine was reportedly replaced with Wheat and Cassava flour. Since then the police has been investigating the matter.
The other arrested senior Police officers include Commandant of Police Professional Standard Unit, Senior Commissioner of Police Joel Aguma and Senior Superintendent of Police Nixon Agasirwe, a former director of crime intelligence in the Police Force.