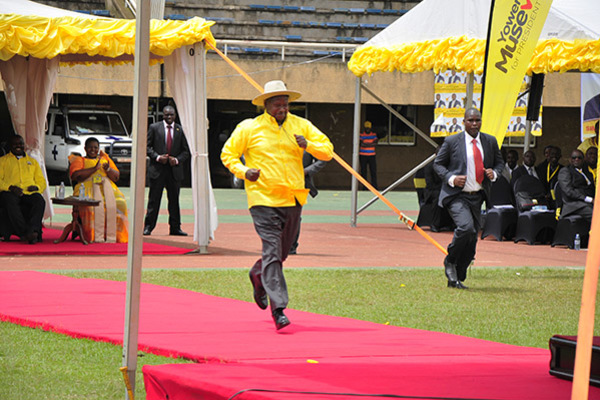 
The National Resistance Movement (NRM) top-most decision making organ, Central Executive Committee (CEC) on Tuesday sitting at State House Entebbe universally endorsed the age limit bill. Sources say 25 of the 29 members Okayed the bill. Only four opposed the amendment.
According to a press release issued on Tuesday evening by Party Secretary general Richard Todwong, CEC adopted three resolutions including; to fully support the Constitution (Amendment) Bill (No.2) 2017 tabled MP Raphael Magyezi.
The members also agreed to popularise their decision to support the bill to all structures and membership of the party and to the entire country, guiding and mobilising them to support the amendment.


CEC has also called on Ugandans to respect and be tolerant to those with the divergent views. The amendment has received hostility from a big section of Ugandans.
But NRM says the proposed legislation is popular with millions of people supporting President Museveni to seek another term in office after the expiry of his term and clocking the mandatory 75 years.
“In the spirit and culture of democracy that NRM fought for and believes in,” said Todwong, “we call upon the population to be respectful and tolerant of all the diverse views that may be peacefully and lawfully expressed during this process.”

The Observer quoted a source, who says the CEC members were not allowed to freely debate the the controversial bill and in the end, Museveni who is also NRM chairman asked the members to support the bill and also to popularize it.
Museveni reportedly dodged the first part of the meeting, leaving party’s deputy chairman Moses Kigongo to chair , Sources say this was calculated move meant to soften their hard stance before Museveni came in.

READ: Museveni cautions the youth not to waste time on ‘tojikwatako’ idle talk