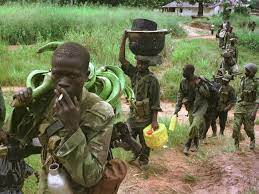 At least nine civilians have been killed in the latest attack in eastern DR Congo to be blamed on the Allied Democratic Forces (ADF) militia, local sources said.
The assault targeted farmers on the border between North Kivu and Ituri provinces, Beni district administrator Donat Kibwana told AFP.
Nine bodies were taken to the morgue in the town of Oicha, he said.
The victims had been knifed to death, civil society activist Lewis Saliboko said, adding that some of them had had their heads cut off and that more bodies could yet be found.


Nurse Mathe Mupanda Salomon said that, in addition, “young people recovered 13 bodies from the bush,” which would put the death toll at 22 — although none of the other sources could confirm this figure.
The ADF is the deadliest of scores of armed militias that roam the mineral-rich eastern DRC.

It is historically a Ugandan Islamist group that has holed up in the eastern Democratic Republic of Congo since 1995.
In March, the United States said the ADF was linked to the Islamic State jihadist group.
The ADF was also blamed for the May 31 killings of 57 civilians in displacement camps, which forced thousands more to flee.