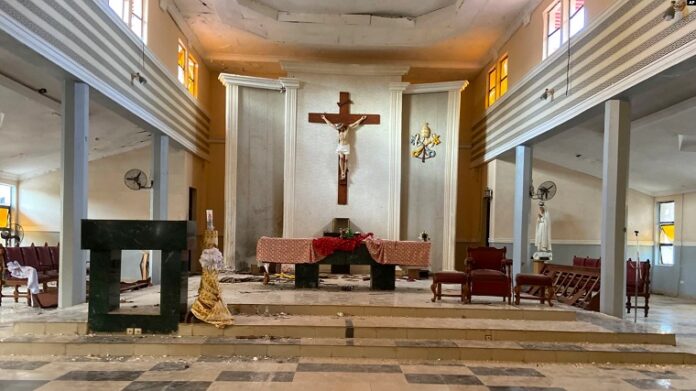 Dozens of worshippers were feared dead in an attack on a Catholic church in Nigeria on Sunday, state lawmakers said.
Legislator Ogunmolasuyi Oluwole said the attackers targeted the St. Francis Catholic Church in Ondo state just as the worshippers gathered on Pentecost Sunday, with gunmen opening fire and detonating explosives. He said that numerous children were among the dead.


The Vatican said that Pope Francis “prays for the victims and for the country, painfully attacked at a time of celebration, and he entrusts everyone to the Lord, that God might send His Spirit to console them.”

Adelegbe Timileyin, who represents Nigeria’s lower legislative chamber, said at least 50 people had been killed. Video footage of the scene showed worshippers lying in pools of blood as people around them wailed.

Statement from the office of the National President, Catholic Laity Council of Nigeria

Am heartbroken and I find it very difficult to address my people at this moment knowing fully well that we are yet to recover from the recent murder of our daughter and friend, the late Deborah Samuel by some heartless religious extremists in Sokoto State.
While we are making frantic efforts to console our people and also plead with our youth not to take laws in their hands but to abide by the bible injunction which admonished us, as Christians, to allow God take control and vengeance in all circumstances, over 50 innocent worshipers on Sunday, June 5, 2022 at St. Francis Catholic Church, Owo in Ondo State were gruesomely murdered by the people we’ve deliberately refused to identify them by their names but prefer to use ‘unknown gun men’ when referring to them. This is uncalled for, this is unacceptable at this time.
I hereby on behalf of the entire Catholic Laity in Nigeria sympathize with the Bishop, priests and the Laity of Ondo Diocese over this act
I want to categorically state here again that as believers in Christ Jesus, we are called to be peace loving people and to preach it with both words and actions but that does not mean we shouldn’t be sensitive to happenings around us and take action when necessary. To our leaders and to all those who feel they have the monopoly of violence to know that every life is sacred and nobody has the right to take it in whatever way be it under the guise of religion, ethnic or political differences.


The crime committed by those killed were just two; one; they were Christians and secondly because they were in the Church on Sunday worshiping God.
As a Christian group and direct mourners of this sad incident, we do not want to only condemn this barbaric act carried out by this animals in human form but use this medium to let the government know that we have taken enough of this killing of our people and we now find it very difficult to chew what they’ve forcefully put in our mouth. The only option left is to throw it out.
For any government who cannot provide security for her people, it is indirectly telling them to defend themselves by whatever means they can. We are indeed tied of words, we want action and the urgent arrest and prosecution of the perpetrators of this evil act.
‘Our leaders must rise against just condemning this act by using the over used words like ‘bringing the perpetrators to book’. They must see the life of every Nigerian as very important not minding where he or she comes from.


What the victims want from the government now for their souls to rest in peace, is the assurance that their killers will be arrested and dealt with according to the laws of the land.
I hereby on behalf of the entire Catholic Laity in Nigeria sympathize with the Bishop, priests and the Laity of Ondo Diocese over this act. Our hearts are with you. We pray for the departed souls and quick recovery to the injured.
Signed:
Hon. Sir Henry Yunkwap KSJI
National President,
Catholic Laity Council of Nigeria