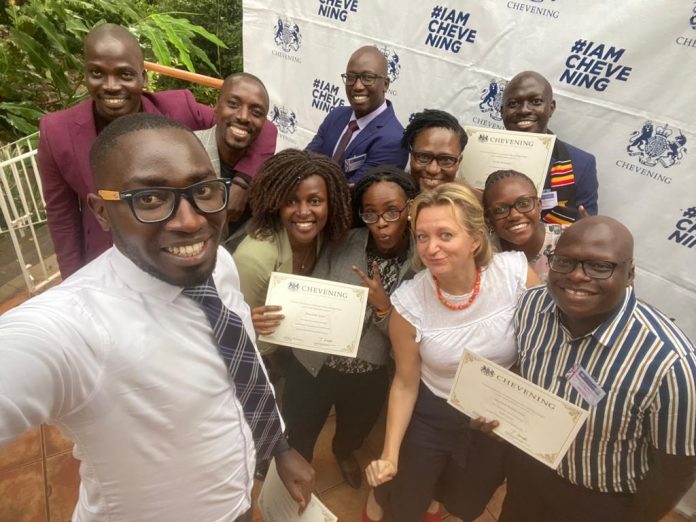 The British High Commissioner to Uganda, Her Excellency Kate Airey OBE held a reception this week to officially welcome back the 2020/2021 cohort of Ugandan Chevening scholars.
Chevening, is the UK Government’s international scholarship scheme which has been running since 1983 aimed at developing global leaders. For the academic year 2020/2021, 16 Ugandans received the scholarship, which consists of a one-year fully funded master’s degree at Universities around the UK.


An important requirement of the Chevening Scholarship is that the scholar returns to Uganda afterwards to ensure that Uganda benefits from the investment.
In her remarks to the scholars, High Commissioner Kate Airey said: ‘We are looking at the next generation of future leaders for this country, you have been supported and granted the skills to sharpen your tools and we have no doubt that you will make a huge impact in your respective sectors and contribute to Uganda’s economic development’.
The Chevening Scholarship is hugely popular with over 1000 Ugandan applications in the last application round. Last year twenty four Ugandans were selected and they are currently in the UK completing their studies. The Chevening applications for the academic year 2022/2023 will open in August 2022.


Speaking on behalf of the 2020/2021 Ugandan Chevening scholars Silvester Bwetabure said ‘The challenging experience of the studying through the pandemic cannot come close to the immense opportunity this is for us. Evidently, from this cohort, Chevening has upheld Britain’s public diplomacy effort of selecting Ugandan professionals with great leadership strengths to study in the UK. And this will surely create lasting positive relationships within the cohort which consists of the best crop of future leaders, influencers, and decision-makers, drivers of positive national and global change.”