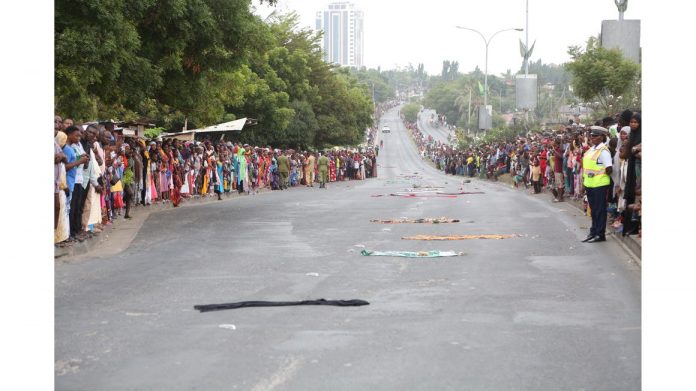 Eleven Presidents from across Africa will pay their last respects to the late President John Magufuli, whose body will be set up tomorrow for mourning at the Jamhuri Stadium in the national capital Dodoma.
Dr Magufuli died of heart complications at Mzena Hospital in the city on March 17, and is expected to be buried on Friday, March 26 in his hometown of Chato in Geita Region.

The government spokesperson, Dr Hassan Abassi, said in a press release that he will announce the names of the ten presidents today
On Sunday, thousands of people thronged Uhuru Stadium in Tanzania’s commercial capital Dar es Salaam to pay their last respects to the body of former President
Earlier On Saturday Thousands, of Tanzanians lined up the Ali Hassan Mwinyi Road and the Rashi Kawawa Road to witness the motorcade carrying the fallen President’s casket as it drove to the Uhuru Stadium.
Many waved tree branches calling out the name of the late President; others held flowers whereas at around Kigogo women lay their kangas on the road as symbol of respect.


Meanwhile, the deceased president reportedly led prayers with doctors and his care givers at the hospital before taking his last breath, family spokesperson, Ngusa Samike revealed.
The family spokesperson said that the late Magufuli received the ‘anointing of the sick’ sacrament and dua in the presence of former Dar es Salaam Archbishop, Polycarp Cardinal Pengo, St. Peter’s Church Parish Priest Father Alister Makubi, and Tanzania’s Chief Sheikh, Abubakar Zubeir.- the citizen newspaper reported
In the other news, The United States’ vice President Kamala Harris has sent congratulatory message to President Samia Suluhu Hassan upon her swearing in as the first female head of state of the United Republic of Tanzania.


“Sending best wishes to @SuluhuSamia following her swearing in as Tanzania’s new President – the first woman to hold the office. The United States stands ready to work with you to strengthen relations between our countries,” wrote Ms Harris on her twitter handle.
The two women share a similar history, Harris is the first female vice president and the highest-ranking female official in U.S. history, as well as the first African American and first Asian American vice president.