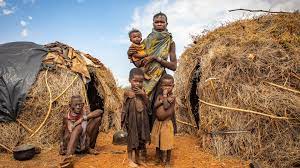 Major cities in East Africa have witnessed an increase in temperatures that almost doubles the 1.1°C warming that the globe has experienced since pre-industrial times. Since 1860 Addis Ababa (Ethiopia) has warmed by 2.2°C, Khartoum (Sudan) by 2.09°C, Dar es Salaam (Tanzania) by 1.9°C, Mogadishu (Somalia) by 1.9°C, and Nairobi (Kenya) by 1.9°C (East Africa Hazards Watch).
The ice cover of Mount Kilimanjaro decreased 85% between 1912 and 2007. The snow could disappear in less than 20 years and ice as soon as 2022. We might well be the last generation to see snow on Mount Kilimanjaro and the first to witness the disruption of the ecological systems and biodiversity it supports.

2. More heatwaves
The increase in temperatures is leading to worse heatwaves. Since the 1950s, heatwaves have become longer, more frequent, and hotter. Since heatwaves are not routinely monitored in sub-Saharan Africa heat-related deaths are also constantly underreported. Under current climate projections, the fast-growing population of East Africa will face increased health risks due to extreme heat.
3. More cyclones

In 2019 a record-breaking number of 8 tropical cyclones developed over the Indian Ocean and made landfall over different locations in Asia and Africa. About 90% of anthropogenic warming is absorbed by the oceans. The Indian Ocean has been reported to be the fastest-warming ocean. This has led to an increase in the number and intensity of tropical cyclones impacting East and Southern Africa. The strongest tropical cyclones on record to affect Mozambique and Somalia occurred in 2018 and 2019. The impact of cyclones now extends beyond coastal areas to inland countries like Zimbabwe, Malawi, and Saudi Arabia.

The warming of the Ocean has also led to stronger tropical cyclones making landfall over the Arabian Peninsula. In 2018, the rainfall from cyclones Mekunu and Luban created desert Lakes and vegetation, an ideal environment for the hatching of desert locusts. The cyclone winds helped the locusts reach East Africa leading to the worst outbreak in many decades. One year into the outbreak, most affected countries are still struggling to control it.
5. Big changes in Crop productivity and fluctuations in prices
Farming in East Africa is dominated by small-scale farmers that depend on rainfall for their agricultural production. Although climate change is projected to affect different crops and geographical areas unevenly, most assessments agree that impacts on crop yields in the region are largely negative. Affected crops include Maize, Sorghum, Wheat, Rice, Soybean, Millet.
In 2019, when East Africa experienced rainfall records and floods in many parts of the region, tomato prices skyrocketed in Kenya, Uganda, and Tanzania. Climate Change is expected to bring more frequent extremes and more intense rainfall. Technological change remains key to reducing the extremely high vulnerability of East African farmers to climate change.


6. More extreme rainfall and floods
Most models predict that East Africa will be getting wetter in the years to come, increasing the risk of floods and displacement associated with more intense rainfall. The frequency of extremely wet short rains (October to December) is expected to increase. It is key to strengthen the resilience of populations to climate shocks since unprecedented extremes are expected.
7. Rise in the water levels of the region’s Lakes and River Nile

In 2020, 6 million people were affected by floods in East Africa. It was one of the wettest years on record. The short rains of 2019 were also wetter than usual. The water levels of many lakes reached very high levels. Lake Victoria rose to its highest level on record. The rising Lakes displaced people and destroyed livelihoods. Record-breaking rises in the lake levels are expected to continue into the future under current climate projections.
The River Nile reached in August 2020 the level of 17.43 meters, the highest level since records began more than a century ago. For the Nile region, models predict that the flow of water in the river will increase by 15%, and the fluctuation in the annual amount of water the river carries will increase by 50% from year to year.


All the years where the Nile experienced significant drought occurred during El Niño and 25–30% of the variability in the Nile is linked to El Niño. In October 2020, the Indian Ocean Dipole was in one of its highest positive states since records began, bringing floods to East Africa and fires to Australia. In Djibouti, it brought in 4 days the amount of rainfall the country receives in 2 years (338 mm).
10. The seasons are getting shorter
Climate Change is affecting the length of seasons. Analysis of trends from 1981 to 2010 shows that the duration of the three seasons are getting shorter due to late-onset and early withdrawal of the rains. The decreasing trend is larger for June to September than for October to December. Traditional forecasting methods used by rural communities, which depend on ecological signs, are no longer helpful.


A lot of the progress made in East Africa over the past decades happened in climate-dependent sectors. Climate Change is posing an unprecedented threat to livelihoods and ecological systems. Using Climate Services and Climate Information to adapt to those changes is key for the sustainable development of the region.