Home Business Museveni: I am happy young people taking over the Judiciary & other... 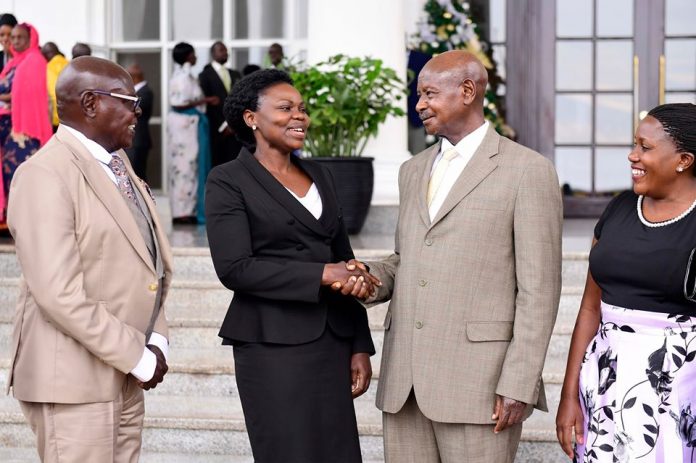 By President Yoweri Museveni
On behalf of elected leaders and the freedom fighters, I am pleased to witness a shift in the Judiciary and other government institutions, beefing up the expansion of our base of cadre-ship, with the young people taking an active role.


I remember when I used to swear-in Judges who were all much older than myself, progressively, that has changed over the years.
Therefore, as the newly appointed Judges of the Court of Appeal and the High Court took oath on monday at State House Entebbe, I had a few points to present on behalf of the constituents I mentioned earlier, where the need for us to have a convergence of minds, cannot be over-emphasized;

1. On the offenses of murder, rape, and defilement, we have very strong views in line with the old age rule of an eye for an eye in the case of murder, and the strongest and unrelenting punishment for the latter two. A dog that steals, must pay with it’s back. This is not to mean that we are vindictive, but the wrongdoer must apologize and rectify it. What we cannot accept is impunity.


On land; especially the bibanja holders here in Buganda because much of the suffering is concentrated here, where you have people who claim they love Baganda and they cause them so much trouble, supporting a system where the villagers have no rights and can be chased around. It is going to be difficult for people who think that I will stand aloof while bibanja holders get expelled from their land. It is my duty, to shout as loudly as possible, to all and sundry, that this is not acceptable. The security of persons and property is very crucial to our struggle.


2. On commercial justice; due to our continued engagement with the people, they are gaining an appreciation for engaging in production and as such, our economy is growing. As a result of conscious economic decisions and security, we are also witnessing a boom in manufacturing, putting us well on our way to getting into good money economics. Therefore, to safeguard the competitiveness of Uganda, commercial justice must be expended expeditiously. Business cannot grow with slow justice, it is not fair.


I am now enjoying myself because of the nature of “problems” we are running into now. In some parts where the people are listening to our message of wealth creation, the problem is now excess milk, bananas, sugar, maize, etc., but remember that for long, we have told our people to shun all manner of sectarianism; tribal, religious, all of it.
Prosperity comes with thinking about Uganda, not just tribes, thinking about East Africa above Uganda, thinking about Africa and the world. So, the next most important effort is going to be the integration of Africa, to realise prosperity in the modern sense. The judiciary must play its part in this process, bearing in mind that we are also dealing with a changing society from a pre-capitalist system, to a modern money economy.


The issue of village thieves, along the way, distorting these efforts, even though they are not murderers, should not be looked at as a small matter, as it affects the momentum towards the transformation of society.
3. On remuneration; the interests of the Judiciary and the executive are aligned. The recent salary enhancement can be considered as a teaser, as we continue to improve our economy.