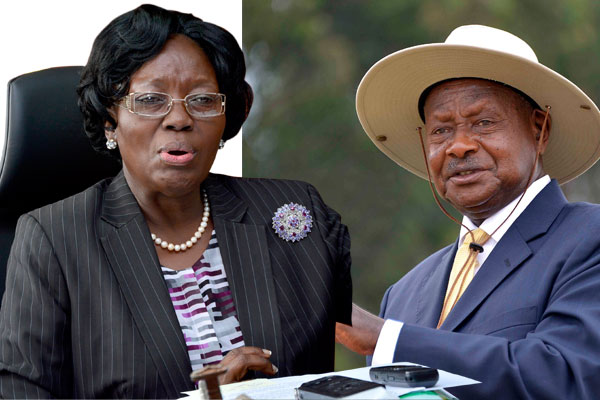 
The Motion for commending the Speaker was moved by hon Nsaba Buturo. In his motion, Hon Nsaba Buturo appealed to the members of IPU Parliament and the International community to respect the cultural values and aspirations of all members.
‘ ‘Madam Speaker, you demonstrated that you can stand up against those unacceptable practices. You did in 2009, 2012 and you have done it again. We are proud of you. ‘’ Nsaba Buturo said adding that The external interests have threatened and used all kinds of means to force nations such as Uganda to accept the same sex practices.
The former ethics minister urged Ugandans and the Members of Parliament to reject homosexuality in all its forms and manifestations.

Hon Akello Lucy called told MPs that its time for Uganda to send a strong message to the world. ‘ ‘Let us not fear what they will do to us. We shall not allow same sex marriages’’ she said.
The Kitgum Woman Member of Parliament Hon Beatrice Anywar told that children in schools are at risk of being recruited into homosexuality ‘ ‘We need to clean our own house; let us flash a torch in these institutions where we think these vices may be and advise the youth who are vulnerable.’’ She said.


On his part, Hon Silas Aogon observed that anybody to support homosexuality is to support sexual terrorism; ‘‘it is uncouth, unacceptable and not African. The right way is the Biblical way.’’
Meanwhile, LGBTI rights activists are trying to block President Museveni’s planned visit to the United Kingdom for the Commonwealth summit mid-April 2018. In April 2018 (16th-20th), the UK will host the Commonwealth Heads of Government Meeting (CHOGM) and leaders from all the member countries – including Uganda are expected to gather in London and Windsor.


An online petition by Godfrey Kawalya, a Ugandan gay man and an LGBTI human rights activist, living in United Kingdom has been endorsed by more than 20,000 people .
Mr Kawalya claims he left Uganda “due to the degrading and inhuman treatment” he received under the leadership of Yoweri Museveni because of his sexuality.
“I have Post traumatic depression which is likely to be triggered by the presence of the main perpetrator of my worst experience as a gay man. I therefore appeal to you to sign this petition such that Mr Museveni can be stopped from coming to United Kingdom,” Kawalya’s petition to the United Kingdom Home Secretary, Amber Rudd reads.


“The United Kingdom government prides itself as one of the best countries for LGBTI people, but I am very worried that this well-deserved record will be damaged by the official reception of the leader of one of the worst countries to be gay in the world,” It continues.
“He claims that homosexuality is a life choice and any demand for equality and justice for LGBTI people is just ‘social imperialism’. He has stated that it is a bad omen, sinful and unreligious for any person to receive aid from a person who advocates for LGBTI equality. This is a clear violation of the Commonwealth and British values, hence making him a threat to the British public,” It adds.


In UK, LGBT citizens have most of the same legal rights as non-LGBT citizens and the nation provides one of the highest degrees of liberty in the world for its LGBT communities.
The Uganda Anti-Homosexuality Act, 2014 was passed on 17 December 2013 with a punishment of life in prison for “aggravated homosexuality.” The bill was signed into law by the President Museveni on 24 February 2014. On 1 August 2014, however, the Constitutional Court of Uganda ruled the Act invalid on procedural grounds