Home Business I have never received a bribe from anyone – Museveni 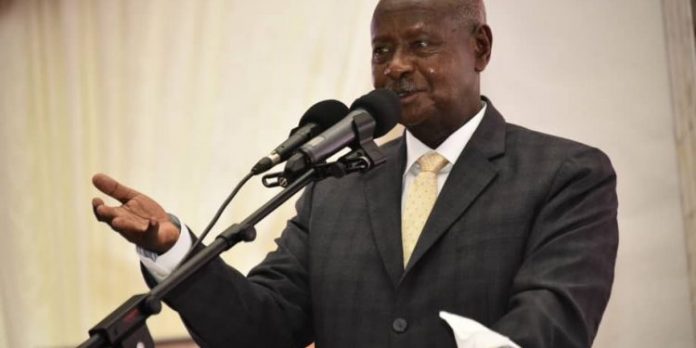 ‘ ‘I have never received a bribe from anyone and I therefore upon all the leaders at all levels in Uganda to follow that example.’’ President Yoweri Museveni said during the 21st National Prayer Breakfast.


In his address, President Museveni urged leaders not to be tempted “to abuse the trust given to you by God”. He also asked the leaders at all levels in Uganda to respect the mandate given to them by Ugandans by not involving themselves in corruption among other bad practises.
Museveni was hosted by Speaker Rebecca Kadaga at the Pearl of Africa Hotel, Nakasero, for the annual National Prayer Breakfast which traditionally precedes Independence Day.

“You are given a little trust, you abuse it. How then will you gain bigger trust from God? I have for the past 60 years seen people destroy miss out on opportunities because of abusing trust. If you have been trusted in small things you could also be trusted in big things”
Quoting Luke 16:10-12:, the president said : Whoever can be trusted with very little can also be trusted with much, and whoever is dishonest with very little will also be dishonest with much. So if you have not been trustworthy in handling worldly wealth, who will trust you with true riches?

o not be corrupt. Do not agree to take a bribe. I have never taken or accepted a bribe from anyone,” he says.

Reiterating what American Pastor Johnny Enlow had preached, Museveni urges people to be poor in spirit, be meek and do justice to other people. “Be humble,” he says. “Do no mock God.” He said.


Speaker Kadaga made a call to conscience for the corrupt, saying they should give up their high life to accord basics to the poor.
“I just want to pray that in this country, those who sleep on mattresses of cash that they cannot consume, to release that money for the schools, the roads and the hospitals,” said Kadaga.
The Prayer Breakfast was this year held under the theme “the power of character in leadership”, with author of Seven Mountains Prophesy, Pastor Johnny Enlow, as keynote speaker.


Mr Enlow criticized the prevalent mode of preaching the gospel, which he said overemphasizes heavenly prosperity and neglects earthly needs of believers.


God, said Enlow, wishes the heavenly prosperity to be replicated here on earth, and not just in heaven alone.
“If the God of the universe comes and says ‘I want to help you inherit the planet; I want to help you inherit the Kingdom’, it means let the justice in heaven come to earth, let the education in heaven come here on earth, let the arts and entertainment, the economy, the way government functions, let it come to earth,” said Enlow.