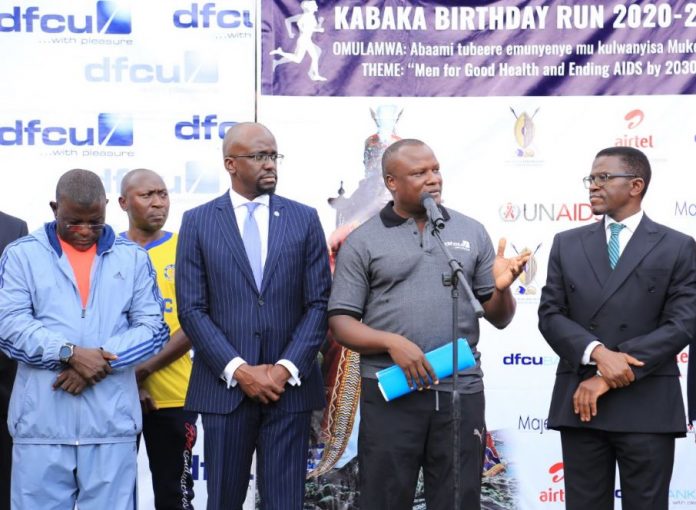 dfcu Bank in partnership with the Buganda Kingdom has today provided updates on the ongoing preparations of the upcoming Kabaka Birthday Run (KBR) that is slated for the 5th April 2020. The press event, that preceded a physical fitness session, saw the KBR 2020 kit officially unveiled alongside an announcement of the 5km route that remained unchanged, a new route for the 10km race and some minor changes to the 21km route.


In December 2019, dfcu Bank signed a three-year partnership valued at over UGX, 500,000,000 with the Buganda Kingdom, making it the official Bank sponsor for the annual Kabaka Birthday Run. According to dfcu Bank’s CEO, Mathias Katamba dfcu’s partnership with the Buganda Kingdom is geared towards driving a sustained understanding that testing for HIV is an essential gateway to HIV prevention, care and treatment.

“As we prepare for this year’s run it’s important for all of us to realise that we will be running for a great cause – a cause that transcends tribe, cultural beliefs, religious or political affiliations, social classes and any other differences we may have as Ugandans.
For dfcu Bank, the Kabaka Birthday Run is not just another Corporate Social Responsibility cause. It is about creating more possibilities for awareness among at most-at-risk and hard to reach populations, embracing voluntary testing among men and access to health care for those who test positive.” Katamba added.


For the next three years, the Kabaka’s Birthday Run will be championed under the cause; ‘Men against AIDS to save the girl child’, which is aimed at driving awareness about HIV/AIDS and encouraging men to get tested, get treated and ultimately protect women against infection.