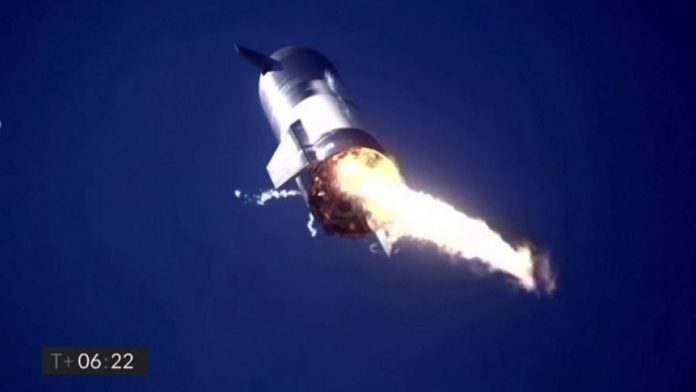 The latest prototype of SpaceX’s next-generation Starship rocket launched successfully on Tuesday but exploded on impact during an attempted landing after a development test flight, in a repeat of an accident that destroyed a previous test rocket.
The self-guided, 16-story-tall rocket initially soared into the clear, blue South Texas sky from its Gulf Coast launch pad on what appeared from SpaceX’s livestream coverage to be a flawless liftoff.


Reaching its peak altitude of about 10 km (6 miles), the spacecraft then hovered momentarily in midair, shut off its engines and executed a planned “belly-flop” maneuver to descend nose-down under aerodynamic control back toward Earth.
The trouble came when the Starship, after flipping its nose upward again to begin its landing sequence, tried to reactivate two of its three Raptor thrusters, but one failed to ignite. The rocket then fell rapidly to the ground, exploding in a roaring ball of flames, smoke and debris – 6 minutes and 26 seconds after launch.
“We had, again, another great flight up … we’ve just got to work on that landing a little bit,” SpaceX principal integration engineer John Insprucker said on the company’s webcast of the flight
The company is developing Starship with the goal of launching cargo and as many as a 100 people at a time on missions to the moon and Mars.

Although Starship SN9 suffered the same explosive fate as SN8 two months ago, SpaceX views the test flight as a step forward in the rocket’s development. SN10, likely the next to attempt a launch-and-landing, was already in place when SN9 took to the skies.
“So all told, another great [flight] — and a reminder, this is a test flight, the second time we’ve launched starship in this configuration,” Insprucker said. “We’ve got a lot of good data, and [achieved] the primary objective to demonstrate control of the vehicle and the subsonic reentry.”
Musk previously said that Starship could potentially fly people in 2020, but he’s since acknowledged that the rocket still has many milestones, including “hundreds of missions,” to go before that happens.


While SpaceX’s fleet of Falcon 9 and Falcon Heavy rockets are partially reusable, Musk’s goal is to make Starship fully reusable — envisioning a rocket that is more akin to a commercial airplane, with short turnaround times between flights where the only major cost is fuel.
The complete Starship rocket, which will stand 394-feet (120 meters) tall when mated with its super-heavy first-stage booster, is the company’s next-generation fully reusable launch vehicle – the center of Musk’s ambitions to make human space travel more affordable and routine.
A first orbital Starship flight is planned for year’s end. Musk has said he intends to fly Japanese billionaire Yusaku Maezawa around the moon with the Starship in 2023.

‘‘We are not bothered by Bobi Wine’s allegations of court favoritism’’...