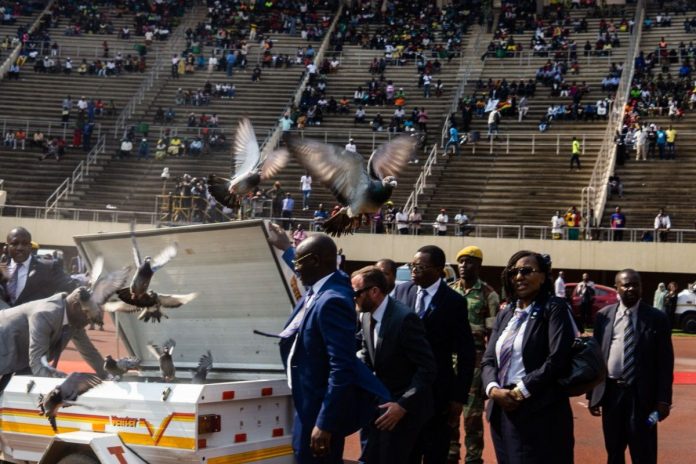 African leaders, past and present hailed Zimbabwe’s former president Robert Mugabe as a liberation hero, .Howevrr, the man who toppled him two years ago, Emmerson Mnangagwa said “our motherland is in tears”.
However, most seats in the 60,000-capacity stadium were empty.


As the coffin carrying Mugabe’s body was wheeled into the stadium, only a few thousand members of the public had bothered to show up for this funeral service
Many Zimbabweans said they would shun the ceremony because of the repression.

Mugabe left behind a country wrecked by hyperinflation, dollarisation and deeply entrenched corruption.
He led Zimbabwe for 37 years, from independence until he was ousted by the army in November 2017, by which time he was viewed by many at home and abroad as a power-obsessed autocrat who unleashed death squads, rigged elections and ruined the economy to keep control.


The country’s economy is in crisis, with soaring inflation and unemployment, and some blame this on the former leader.
“We are happier now that he is gone. Why should I go to his funeral? I don’t have fuel,” a Harare resident told AFP. “We don’t want to hear anything about him anymore. He is the cause of our problems.”


Mr Mugabe’s body will be viewed by the public in his rural hometown, Kutama, on Sunday, local media report.
When and where will Mugabe be buried? Family spokesman and nephew Leo Mugabe says this should be in about a month, when the new shrine to Mugabe will be built at the existing Heroes’ Acre.