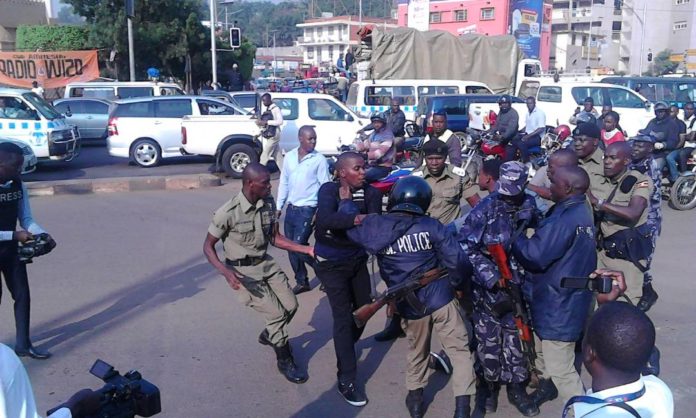 
Transport paralysed in Wandegeya after youth from Kawempe division and surrounding areas blocked roads protesting against increasing unemployment.
The youth were also protesting what they called negligence by government which has left their area wanting in service delivery.

READ:Museveni to the youth: You’re lucky to be living in a peaceful Uganda

“Enough is enough; for how long shall this situation of hopelessness obtain?” one of the unidentified protesters shouted. Uganda belongs to all of us; we demand jobs to survive.”
At least six youth were arrested.


It is estimated that more than 400,000 young Ugandans graduate every year. However, fewer than 100,000 are absorbed into formal employment.
According to the 2014 National Housing and Population Census, riding Boda Boda is one of the fastest growing occupations among the youth in Uganda.
The occupation is no longer for school dropouts. University graduates have since joined the business. This is why you find smartly dressed and English speaking boda boda riders of recent.


Last year, president Museveni acknowledged that, NRM government is at fault for not creating enough jobs for the growing youth population.
‘ ‘ It is the slow pace of creating jobs for them [ youth] that is at fault. What caused the slow pace, especially in the past, was the wrong budgeting after 1990 when the Ugandan economy started recovering. The wrong budgeting takes the form of scattering resources everywhere and trying to be everywhere but end up being nowhere.’’ The president stated in July last year.


The President recently said attributed the non-satisfactory progress of most of the government poverty eradication programs to lack of skills and training for the population; the more reason why the Government for starting the Skilling Uganda Program.


He observed that the NRM government has, since 1995, initiated several programmes aimed at poverty eradication like the Entandikwa loan scheme, the NAADS, the Microfinance, provision of the Youth and Women Fund and the Operation Wealth Creation. However, he added, poverty still remains a big challenge to the country.

READ: Museveni to the Youth: Be patient, the jobs are coming