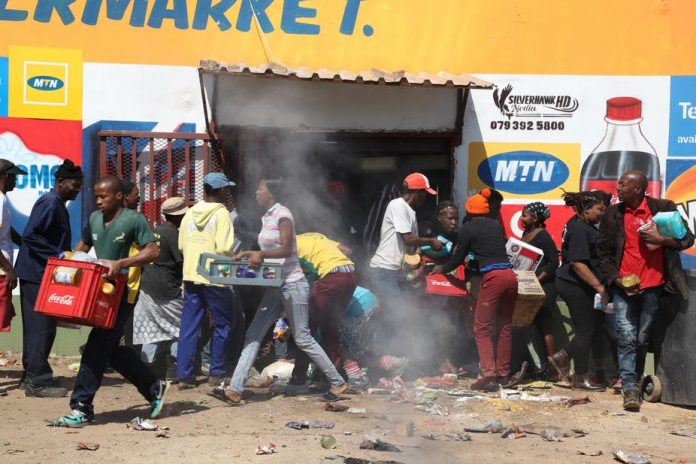 Dozens of people have been arrested in the South African city of Johannesburg after rioters looted shops and torched buildings and vehicles belonging to foreigners
Foreign-owned shops have been looted and hundreds of cars in dealerships around these suburbs were torched.


In video circulating on internet, South Africa Deputy Minister of Police Bongani Mkongi is heard saying: ‘ ‘You won’t find South Africans in other countries dominating a city up to 80%… we cannot surrender South Africa to foreign nationals.”


The looting of foreign-owned shops in South Africa is becoming a daily occurrence and there is no sign of it stopping soon.
Many people have been asking why black South Africans are attacking other Africans. There is no easy answer to this, but it does seem like a combination of straightforward thuggery and xenophobia.
Police fired tear gas, rubber bullets and stun grenades in an attempt to quell the unrest on Monday. Many of the targeted shops are reported to be owned by foreign nationals.
The Western Cape, Eastern Cape and kwazulu-natal have seen numerous incidents of trucks being looted


The crisis led to the ministers of transport, home affairs, police and labour convening a meeting on Sunday to deliberate the issue of violent protest action and to come up with solutions to quell tensions
a number of other African countries have expressed their concern over what is going on in South Africa.
Ethiopia’s embassy in South Africa has advised its citizens to close their businesses during the on-going tension that has seen shops in the commercial hub Johannesburg looted and set ablaze, Ethiopia’s state-linked FBC reports.


It also says that Ethiopians are advised to “distance themselves from any confrontation and conflict” and not go out with expensive jewellery.
Meanwhile, Zambia’s transport ministry has said that lorry drivers should “avoid travelling to South Africa until the security situation improves”.


And, in a tweet, Nigeria’s government has reiterated the words of Foreign Minister Geoffrey Onyeama. It said that Nigerian businesses had been targeted adding that “enough is enough”.


According to observers, the pillars that hold South Africa as a society are being shaken violently and it is time for all citizens, civil society and the private sector to rise up and avert a total collapse which is increasingly looking inevitable with each passing day.
South Africa is a collapsing society. Earlier this year, former transport minister Blade Nzimande told Parliament that during the three and a half year period to January arsonists burned 214 train coaches, setting back the Passenger Rail of South Africa by R632 million.


Sometime last year the N3 highway to Durban, especially around Mooiriver in KwaZulu-Natal, became a no-go zone after thugs set a number of trucks on fire, looting the cargo and murdering the drivers.
Reliable statistics are hard to come by, but back-of-the-envelope figures suggest that over 100 trucks and cargo, to the value of R1.5 billion, have been set alight and looted.
Over 200 drivers, many of them Zimbabweans, have been killed in the process.

My heart breaks when I watch this happening in an African country, why have we given the enemy the opportunity to continue dividing us? Say no to #Xenophobia.