Home Politics ‘‘Whoever they use, they dump’’-Tamale Mirundi cries in studio over Kitatta’s conviction 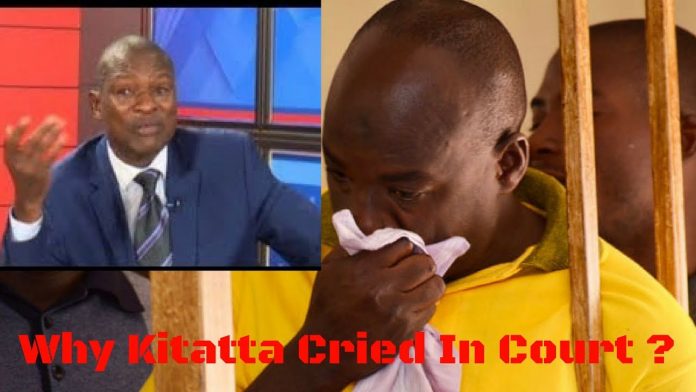 Tamale Mirundi, the presidential advisor on media cried in studio on Monday after receiving news that his close friend and former leader of the infamous Boda Boda 2010, Abdulah Kitatta was convicted for multiple offences by General Court Martial chaired by Lt Gen Andrew Gutti


The Makindye Based General Court Martial convicted Abdulah Kitatta on charges of unlawful possession of fire arms contrary to Sec. 3 of the Fire Arms Act.Kitatta’s arrest and detention came after a group of people attempted to block the arrest of his brother Huzairu Kiwalabye, who was charged with the murder of former Case Hospital accountant Francis Ekalungar.

‘‘They used me and dumped me. They used Kitatta, and dumped him. We worked committedly and this is how the mafia’s rewarded us’’ Mirundi said while appearing on one of the local radio stations on Monday evening.
‘‘After working for 13 years [as Press Secretary to the President] I was dropped in the most humiliating way. I was then appointed presidential advisor- a post that does not exist,’’ Mirundi said without naming those who use dump people. He has in past decried of Mafia’s in goverment

Mirundi said he is only working for President Museveni who looks Uganda, Ugandans and has vision for this country and not the Mafia’s.


Tamale Mirundi served as press secretary to the president for 13 years. During this time, he did not only praise the NRM government, he also attacked and abused, anyone including NRM cadres who pointed out the weakness within the NRM party and the government.
Mirundi who call such people ‘‘shortsighted and self-seekers.’’

He attacked religious leaders, cultural leaders, opinion leaders, ministers among others. He only saved the First Family.


‘‘My mother survived lynching by angry mob, who were not happy with me defending this government. She is now working with help of sticks. I worked for 13 years earning 0.8 a month, the one who succeeded me earns 7m, what is that?’’ Mirundi wondered.
‘ ‘Kitatta was working for Gen. Kale Kayihura. Kayihura is now out of prison and guarded with two armed cars. While Kitatta is in Prison, Ugandans are watching and tired’’ Mirundi said.
Boda Boda 2010, was allied to police, and its patron Kitatta was close friend of [then] Police boss Gen. Kale Kayihura.


In January 2018, Kayihura told Parliament that Boda Boda 2010 had been instrumental in fighting riots in the city after the 2016 elections. He emphasized that Boda Boda 2010 was not a criminal group. The group last year beat up pupils of a city primary school and police officer who were escorting them to a police function in Entebbe but no action was taken against it.


I can call Museveni directly anytime-Kitatta

‘‘I have the President’s ear. I call Museveni directly anytime; I do not need to pass through anyone! I tell him what I believe is true, whether it pleases him or not. And he likes me for that!’’ Kitatta said in an interview with New Vision in January 2018.
He added: I also have Kayihura’s ear. Can you imagine? It is because I am selfless. By the way, President Museveni invited me to State House to address his Cabinet. But I was busy on official duties elsewhere, so I sent three representatives. That shows I have reached a certain level.