Home Politics ‘Who is the Speaker?’ This country was liberated by the military &... 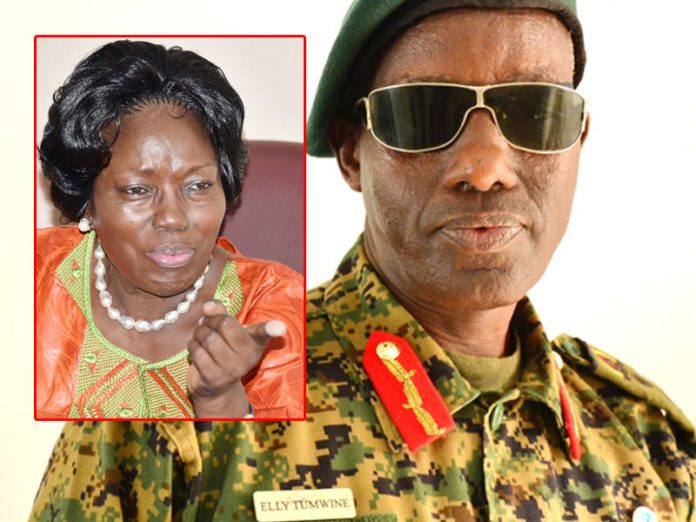 The Speaker of Parliament, Rebecca Kadaga, has asked the House Committee on Rules to investigate Security Minister, Gen. Elly Tumwine, over comments he allegedly made disparaging Parliament.
Bukonjo West County MP, Godfrey Katusabe, who raised the issue said that Gen. Tumwine made the comments when informed about the shoot-to-kill order following the deployment of the Police and army to quell riots in Kasese district when Mirama abattoir was shutdown.


Abdu Noor Mutegeki, a worker at Babughirana Butcher Men Development Association Cattle Market and Dan Benja, a businessman from Isingiro were shot by a joint security force deployed to stop operations in the market.
Katusabe told the Plenary chaired by Speaker of Parliament, Rebecca Kadaga, on Tuesday, 23 July 2019 that Tumwine made comments downplaying the influence and power of the Speaker and the House, to intervene in the matter.
“Gen. Tumwine reacted and said ‘Who is the Speaker?’ This country was liberated by the military and not Parliament,” Katusabe quoted Tumwine.

Hon Nambooze says it isnt the first time that Gen Tumwine is undermining Parliament.
"Gen Tumwine insulted you and this House on radio. When they ask where we were when they fought in the bush, i was a young girl. How did u expect me to fight" #PlenaryUg

Hon. Medard Sseggona moved a motion to refer Gen. Tumwine to the Rules Committee for investigation.
“The Committee would take the occasion to take him through some form of induction and also inquire whether he actually made the statements,” Sseggona said.
MPs said that since the comments touched the Speaker, it would tantamount to conflict of interest since she was chairing the sitting.


“Hon. Members, I am not happy to be in this seat today because part of the issues raised concern the office of the Speaker. The only fair thing to do is to establish whether he said those things,” Kadaga said.
Gen. Tumwiine, who represents the UPDF in Parliament addressed a press conference at Lake View Resort Hotel in Mbarara, on Thursday. The General described as “mob action” the manner in which the entire parliament teamed against him after he was accused among others of undermining the house and insulting the person of the speaker.
On Wednesday, The House voted in favour of having Gen Tumwine appear before the Rules Committee to defend himself against the allegations made against him.


Tumwine’s troubles started when Hon Atkins Godfrey Katusabe, the Bukonjo West MP took to the floor on a matter of national importance, and accused him of issuing the “shoot to kill” order during a dispute over Babughirana cattle market in Kasese.

Gen Tumwine: If anybody loves and would defend this Parliament, then it is me. If there is anybody in this Parliament who feels i have injured them, please forgive me. #PlenaryUg