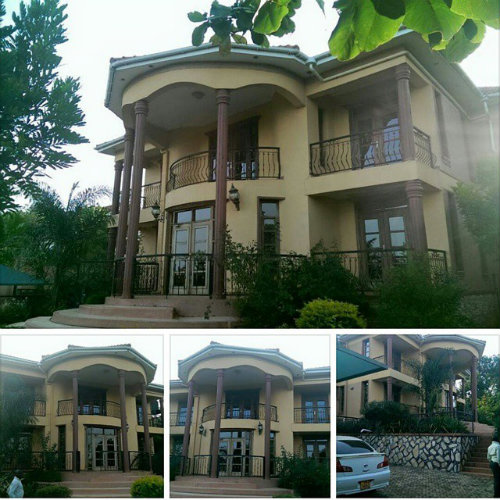 Last year, around June/July, Eddy Kenzo, the BET award winner was in the news having bought a multimillion house.

He made headlines having ‘bought’ a magnificent two storied house.Media reports differed, with some quoting house going for Ugx. 320m, while others quoted 950m, However, me and you know very well, that such house cannot go for such a low price.

Eddy Kenzo, real name Eddy Musuuza took time to invite religious leaders and a few guests for house warming. Well, we can exclusively reveal that this house might have been for just a showbiz. And this is why.

If you saw the pictures, the house was complete, and thus, all that Kenzo and wife Rema Namakula had to do was to bring in property.

A year later, Kenzo is still living in a rented apartment in Makindye Kigunzu. He rents two (three bed-roomed) apartments-one for his ‘escorts’ and the other serves as his home.

One would wonder, why keep renting when your house lies idle?

Secondly, he said the house he allegedly brought is located along Entebbe Road, for the last couple of months we have don’t our best, using all means and connections to locate the house, all in vain. Looks like the house relocated to heaven.

It is also surprising that someone who brought a Ugx. 1.6 billion House is failing to refund Ugx. 70m Tubonga Cash her wife allegedly earned from NRM during the just concluded presidential elections

It is said, following her public apology over Tubonga Naawe, NRM reportedly dragged Rema Namakula to Commercial court. She was given 21 days to refund the cash. The grace period has since expired without her refunding the cash. She has since gone into hiding.

Welcome to Uganda’s celebrity world of lies. The world of living in heaven, when in actual sense they live on earth.