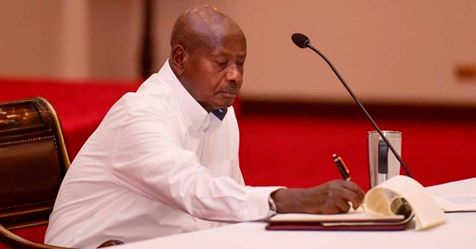 Last week, Cabinet Ministers kept their ears on radio and eyes on social media-all indications showed a reshuffle was imminent.

The president reportedly asked his ministers why they had allowed an “ambitious young man” [Bobi Wine] to roam free attacking him. He asked of what importance they have been to him “since this young boy became MP and later showed keen interest in running for president.”
While the looming reshuffle did not happen, sources close to corridors of power, say it is just matter of time.

If Ugandans had gone to the polls last month, President Yoweri Museveni would score 32 per cent of the votes, which is way below the 50 per cent, an opinion poll by Research World International shows.
While some top NRM and government officials publicly criticize the poll, off camera they recognize they seem to be losing the ball to the opponent.
‘‘by the way, things could even be worse than what the poll revealed’’ a senior government official who preferred not be named conferred.
The opinion poll shows Bobi Wine would poll 22 per cent of the votes while four-time presidential candidate Dr. Besigye would go home with 13 per cent.


A major ‘surgery’ in the waiting

The president has in the recent past criticized his ministers for being “sleepy and selfish”.
Analysts say, the president’s recent cabinet reprimand could be an indication that he is now ready to offload; undertake a major surgery on his cabinet, Foreign missions and key government departments. The new team is expected to take on lies of People Power and other opposition leaders.

Sources say, they looming reshuffle will not spare foreign missions.
Knowledgeable sources told Newz Post that the president is likely to appoint young, ambitious Ugandans to head Uganda’s foreign Missions- the missions have previously been reserved for the historicals and politicians who lose elections.
Uganda’s ambassador to New York Adonia Ayebare is widely seen as a role model and thus, he is sure of retaining his position. –His role is calming down the Bobi Wine influence in international community cannot be ignored.


Shake Up at Bank of Uganda

Last year COSASE exposed the rot at Bank of Uganda.
The contract of Louis A. Kasekende, the deputy Governor Bank of Uganda, ends in November this year, and it may not be renewed. The appointing authority may appoint substantive deputy Governor so that when Kasekende’s contract expires, there is no vacuum.
The appointment authority is said to be with report highly recommending cancelling of all appointments that were last year made by Governor Tumusiime Mutebile.
However, sources say aging Mutebile is likely to retain his post since his services are much needed in pre- and post-2021.


In the last general elections, Government was accused of printing money to finance presidential elections- Assuming that happens again, the services of the experienced Mutebile will be needed to clean up the ‘mess’ after the elections.

Highly placed sources told Newz Post that the ministers who are likely to lose their jobs are those whose ministries have been cited in scandals in the recent past.
There are indications that the shakeup will not spare State House. And Principal Secretary Molly Kamukama may finally find herself out.
The wave may also sweep the NRM secretariat, headed by the Secretary General Kasule Lumumba, the Secretariat is said to be underperforming. As we move closer to tough 2021, the NRM chairperson may need a new focused team.


The infighting and under performance of NRM secretariat has seen NRM lose by-elections in the recent past.
The looming cabinet reshuffle: who will survive, who will be dropped?

Reliable sources have it that the appointing authority is ready with the new cabinet list, and remains a top secret.
Those close to the corridors of power say, the next cabinet will be full of youthful and focused Ugandans- who are ready for the tough job- road to 2021.
Analysts says, ministers whose dockets have been in the news for the bad reasons [read scandals] may not survive the axe


Hon. Sam Kuteesa: Analysts are of the view that the Foreign Affairs Minister and one of President Museveni’s longest serving ministers may not survive the axe this time round. Kuteesa’s has held this docket since 2005. Political analysts point to Kuteesa’s alleged role in scandal with Chinese billionaire.
Last year, Kutesa was named in US court documents as having allegedly received Ugx. 1.8 billion bribe to help a Chinese energy company secure business advantages in Uganda
The scandal is said to have tainted the image of country. Recently, there were rumours that Kuteesa had been blocked from traveling to US and Europe over the same scandal. Kuteesa denied all the claims.
The appointing authority may transfer him to the Prime Minister’s officer- preferably making him 3rd Prime Minister.


Hillary Onek and Musa OCweru. If there is one ministry that could see a major shakeup, it is the Ministry for Relief, Disaster Preparedness and Refugees.
February last year, Uganda was in the news for alleged falsification of refugee numbers, misuse of funds meant for the refugees and suspected trafficking of some female refugees.
Until the scandal broke, Uganda was being lauded for its progressive policies and generous hosting of more than 1.5 million refugees from the region. However, the refugee scandal is said to have tainted the country’s image internationally.


Hon. Betty Among: the Land’s minister dark side was recently exposed by Justice Catherine Bamugemereire-led Land commission of inquiry. Hon Amongi though her own company Amobet Investments Ltd, is accused of grabbing a number of plots of lands, one of them belonging to a 53 year old Indian national Ashak Mandakini Patel. Amobet through its Managing Director Henry Mubiru, is said to have applied to the Departed Asians Property Custodians Board (DAPCB) to be allocated Mr Patel’s land located on Plot 29 Acacia Avenue, on Kololo Hill. In the same application dated December 12 December 2017, Mubiru also asked to be allocated Plot 15-17 1St St Industrial Area Kampala, Plot 12A Prince Charlese Drive, and Plot 21 Kyaddondo. The building is currently being rented by Midcom Telecom Company at $9000 a month.


Hon. Matia Kasaija: Hon. Kasaija has had rough time since he was appointed Minister of Finance. Since his appointment the economy has not been at its best. The Agencies under Ministry of Finance including NSSF, Uganda Development Bank, etc have also not performed so well.

And his latest fight with Permanent Secretary Ministry of Finance Keith Muhakanizi may have exposed Hon. Kasaijja. Details of this fighting will come in our next story.


Hon. Kibuule. The State Minister for Water is also likely to be dropped following a series of scandals- Land saga in Mukono, Stanbic Bank incident in which he reportedly assaulted the Guard may also cost him the cabinet slot.

David Bahati: At one point, Hon. Bahati was rumored to be the next Finance Minister if Matia Kasaijja is axed. However, inside sources have it that the anti-gay champion may have failed to among others manage the compensation of Ugandan traders who supplied goods to South Sudan government.