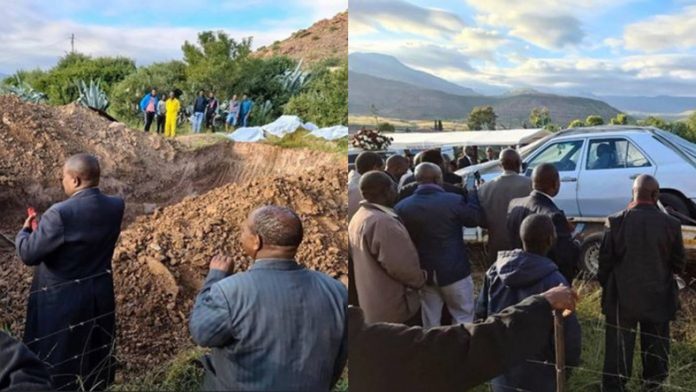 South African businessman, Tshekedi Pitso of Jozanashoek village in Sterkspruit, Eastern Cape, was on Saturday granted his wish and got buried in his Mercedes Benz E500
The price range for the Mercedes-Benz E500 varies based on the trim level you choose. Starting at $93,642 and going to $141,700 for the latest year the model was manufactured


He was aged 74.
Last Saturday, Jozana village in Stekrspruit came to a standstill as the funeral of Tshekedi Pitso became the centre of attention.
People looked on as Pitso, dressed in a cream white, sat behind the steering wheel with his hands placed on the steering wheel in his favourite Mercedes Benz which was towed to the graveyard.

Smartly dressed, the body of Tshekede Bufton Pitso was lowered into his final resting place in Sterkspruit over the weekend, as mourners somberly looked on
Photos of the ceremony show Pitso behind the wheel of his car as the vehicle is mechanically moved toward the hole in the ground. He is positioned in a way to resemble him driving and is even wearing a seatbelt.


Reports say two years ago, Tshekedi Pitso told his family that he wanted to be buried inside his favourite car when he dies, and the family thought it necessary to do just that for his corpse now.
Pitso, who was 72 years old at the time the instruction, had bought himself a 1980s E500 Mercedes Benz adding to a fleet of Mercedes Benz that he owned.


The deceased’s 49-year-old niece Sefora (Pitso) described his uncle ‘ ‘ as flamboyant person who loved beautiful things. We was wearing a cream suit and tie’’
“My uncle made it clear that he wanted to be buried inside his car. He was a lover of Mercedes Benz and as a family we had to grant him his wish,” she said.


Mfundo Nqata Bongela on Facebook wrote “The old man remained controversial and rebellious though, his demeanor was unmatched’’