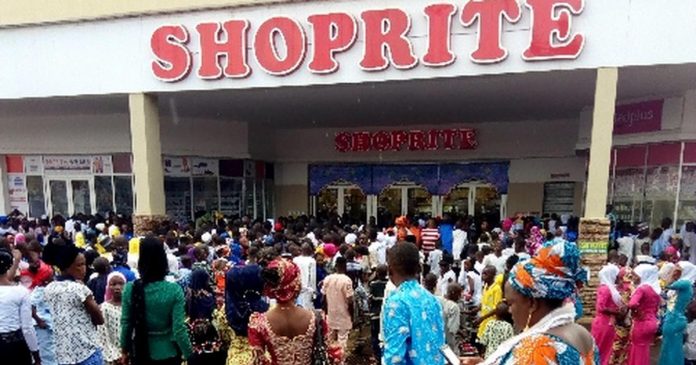 Outrage is growing among Africans everywhere after a new spate of xenophobic attacks in South Africa.
In short video circulating on social media, hundreds of Zambians can be seen rushing to enter retail outlets Pick and Pay owned by South Africans in capital Lusaka.


There are also reports of Nigerians looting South African businesses in Lagos and Ibadan. In another video, Looters on Tuesday also attacked The store in Surulere belonging to PEP, a South African-owned clothing and accessories dealer, was also vandalised and looted

There are multiple reports of looting at multiple South African owned business locations around Lagos. The Shoprite store in Novare Mall, Sangotedo were also looted by dozens of people late on Tuesday, September 3. Many Nigerians were caught on video fleeing the store with several items stolen.


The men of the Nigeria Police Force, Kwara Command, on Tuesday, took over the Kwara Mall, housing Shoprite and other businesses to prevent possible reprisals following xenophobic attacks in South Africa. elsewhere, A Nigerian mob laid siege on an outlet of Shoprite located inside Circle Mall in the Jakande area of Lagos State on Tuesday.
Shoprite staff, customers as well as others in the mall were thrown into a state of panic when a group started disruptive activities, knocking items off shelves.


A swift reaction from police officers then forced the protesters out onto the streets where they were filmed burning tyres and disrupting activities on the Lekki-Epe Expressway. Many were also reported to have thrown stones at the mall.
On Tuesday, a group of concerned citizens in Zambia wrote to the police with notice of a peaceful march and gathering at the premises of the South African Embassy in the capital Lusaka.


The group said the march was “to show displeasure to the South African government for the horrific conduct exhibited by their citizens and complacent approach their government has taken.

Looters attacked Pep in Surulere yesterday, there are multiple reports of looting at multiple South African owned business locations around Lagos and in Ibadan as well.
Some reports state that some looters are attacking this morning pic.twitter.com/6UwCdhIdX3

Taking to the social platform Twitter, Nigerian Foreign Minister Geoffrey Onyeama vented his anger at the attacks which also targeted Nigerians living in South Africa. “Received sickening and depressing news of continued burning and looting of Nigerian shops and premises in South Africa by mindless criminals with ineffective police protection,” he wrote.


“Enough is enough.” Without getting into details, Onyeama said that Abuja would take “definitive measures.”
Zimbabweans are one of the bigger groups of African immigrants in South Africa and have accordingly been targeted too. Everson Chakadya’s brother, a truck driver, is among the victims of xenophobia in the neighboring country. “A month ago, he was petrol bombed at a road intersection. He was beaten up and left for dead. He lost all the goods he was transporting. … I don’t think such behavior should be tolerated,” Chakadya said.


In Nigeria,video of South Africa’s former Deputy Police Minister, Bongani Mkongi, shared by a local portal, The Signal Nigeria, has got Nigerians rattled.
Tweeps are calling for an economic boycott that could adversely affect South African business interests in Nigeria. Already there are calls for boycott of among others, MTN, Shoprite, DSTv and Stanbic bank.


In a statement issued on Tuesday in Abuja, the Minister of Information and Culture, Alhaji Lai Mohammed said that targeting South African businesses in Nigeria, like shoprite and MTN, for attack over Xenophobia would hurt Nigerians more.