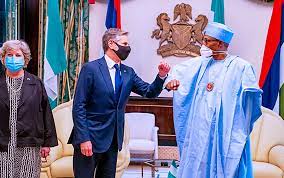 U.S. Secretary of State Antony Blinken said Friday the United States sees African countries as equal partners as it seeks to bolster its influence on a continent that receives much of its foreign aid from U.S. rival China.
“The United States firmly believes that it’s time to stop treating Africa as a subject of geopolitics — and start treating it as the major geopolitical player it has become,” Blinken said in Abuja, Nigeria, outlining the Biden administration’s policy toward Africa.


The continent needs billions of dollars annually for massive infrastructure projects such as building roads, railways and dams. Over the past decade, China has provided much of the infrastructure funding Africa has received.
‘We do things differently’
Without mentioning China, Blinken vowed the U.S. would agree only to transparent and voluntary global infrastructure agreements that produce tangible benefits on the continent.
“Too often, international infrastructure deals are opaque, coercive; they burden countries with unmanageable debt; they’re environmentally destructive; they don’t always benefit the people who actually live there,” Blinken said. “We will do things differently.”
Blinken is nearing the end of a five-day, multination visit to Africa, his first as secretary of state. He said Friday his trip is aimed at fostering cooperation on global health security, battling the climate crisis, expanding energy access and economic growth, revitalizing democracy and achieving peace and security.


The trip is part of the Biden administration’s effort to strengthen alliances in Africa after four years of a unilateralist approach under former U.S. President Donald Trump. It comes amid worsening crises in Ethiopia and Sudan. While in Kenya, Blinken called for ending the violence in Ethiopia, combating terrorism in Somalia and reviving Sudan’s transition to a civilian government.
Despite large contributions of money and vaccines to contain COVID-19 and other infectious diseases, the U.S. has had little success in gaining influence on the continent.
Improved relations the goal
Nevertheless, Blinken said U.S. President Joe Biden would continue to work to improve relations with African countries.
“As a sign of our commitment to our partnerships across the continent, President Biden intends to host the U.S.-Africa Leaders’ Summit to drive the kind of high-level diplomacy and engagement that can transform relationships and make effective cooperation possible,” Blinken said.

The top U.S. diplomat did not say when the summit would take place.
Hours after his speech in Nigeria, Blinken arrived in Senegal, the last stop on his trip to Africa that also took him to Kenya. Blinken will meet in Dakar with Senegalese President Macky Sall “to reaffirm the close partnership between our two countries,” the U.S. State Department said earlier this week.