Home Politics UPDF soldier sentenced to 05 years for conning priests with over 40m-... 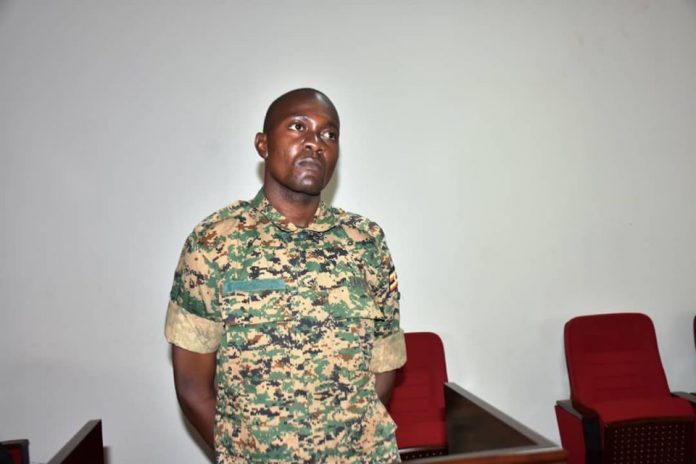 A UPDF soldier, has been sentenced to five years’ imprisonment by the CMI Unit Disciplinary Committee (UDC), the lower military Court on counts of obtaining money by false pretence.
Private Kalulu Stephen got money worth 40M from one Rev Fr Kawanguzi Emmanuel and Rev Father Isanga Joseph Baligeya after deceiving the dual that he works with State House and has connection with the President.


He promised to help them bring president Museveni to Kamuli mission hospital and encourage him to renovate the same.
Kalulu further promised to provide the facility with water tanks from UPDF.
The priests who had land issues with neighbours of the hospital land confided in the soldier who promised them that the president would Fence their land. In turn priests sent unspecified amounts of money through mobile money to facilitate Kalulu go about the mission.

While reading the judgement, the chairman CMI UDC Col. Tom Kabuye informed court that the army will not condone this kindof indiscipline and impunity especially from its own.
After overwhelming evidence was presented, Prosecution led by Lt Chris Tumusime asked court that the convict be sentenced to a maximum sentence as a deterrent measure to all those who may commit similar offences. He added that involving State House and the institution of the Army was a grave offence that required a heavy punishment.


Pte Kalulu later prayed for mercy from the court saying he has a big family with five children. He requested Court to also consider the time he has been on remand for nine months and that he is also sick and asked the Reverend Fathers to forgive him and pray for him.
After listening to both sides court sentenced the convict to Five years in prison.