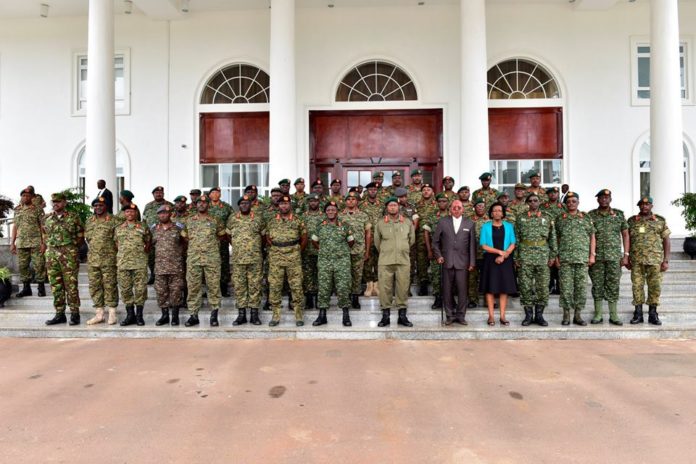 President Museveni on October 25 and 26 met officers of the UPDF High Command and later the Defence Forces Council top on the agenda was proposed presidential age limit bill.
The army council comprises members of the high command, persons who were senior army officers on 26th January 1986, commanding officers of brigades and battalions and officers commanding equivalent units of the defence forces.


The high command comprises of the Commander in chief, the CDF, all commandants of service units in the army, directors and other senior army officials. According to a press release signed by UPDF spokesman Brig Richard Karemire, the meeting took place at State House in Entebbe.
“On the unnecessary anxiety arising from the current debate on the Constitutional Amendment Bill 2017, the meetings urged all Ugandans to exchange views in a free, rational and civil manner that does not in any way jeopardise national security and stability,” the statement reads in part.

In the meeting, Museveni made presentations about understanding where the country has come from and where it is headed.
“The meetings discussed and adopted the theses written and presented by the president and commander-in-chief, as repositories of our mission which will re-energize the understanding of our purpose. Our destiny lies in ensuring that our common interests take precedence over identity in order and this diagnosis, helps to correctly plot our journey towards the desired end state of preserving our sovereignty, maintaining our democracy, promoting our people’s prosperity and strategic security through integration and preserving our heritage and identity in a dynamic way. These are achievable through emphasis on Patriotism, Pan Africanism, Social Economic transformation and democracy,” Museveni said.


read: Bobi Wine to M7: Ugandans have no guns, May be feeling as oppressed as you felt in 1980

According to the statement, “the meeting reiterated its resolve to always support the Constitution, the substance of our democracy, the rule of law and the choices of the people of Uganda.”