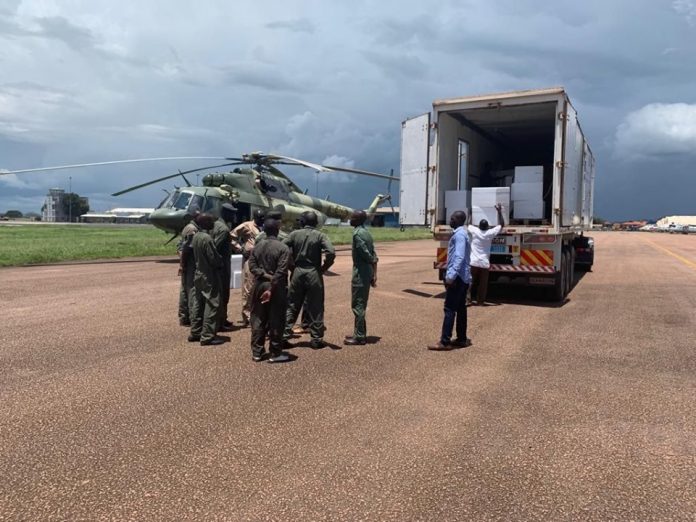 The Uganda Peoples’ Defence Forces’ Air Force has on October 20, 2019 airlifted vaccines from Entebbe to five destinations across the country in support of the Ministry of Health’s national immunization drive against measles and rubella.


UPDF Helicopters delivered vaccines to Gulu, Kiruhura, Soroti, Mbarara and Kabale Districts following an emergency request by the Ministry of Health to the UPDF for a quick delivery to arrest a possible drug shortage.
The choppers were able to deliver the vaccines to the destinations in less than two hours.

The Commander Air Forces, Lt Gen Charles Lutaaya said the UPDF is always ready to respond with its capabilities in support of civil authorities for the good of the nation.

The UPDF has also used its nationwide ground network to support the Ministry of Health’s ongoing nationwide vaccination drive.

The UPDF Commander Land Forces Lt Gen Peter Elwelu said the UPDF is a suitable institution to partner with in any government program because it has several capabilities and deploys in all parts of the country, including the hard to reach areas such as parts of Karamoja.


He said all UPDF commanders have been at the forefront in mobilizing the soldiers’ families and the neighboring communities to embrace the nationwide immunization program.
The UPDF among its functions is mandated to offer support to civil authorities. Members of the Force also participate and benefit from all national government programs.