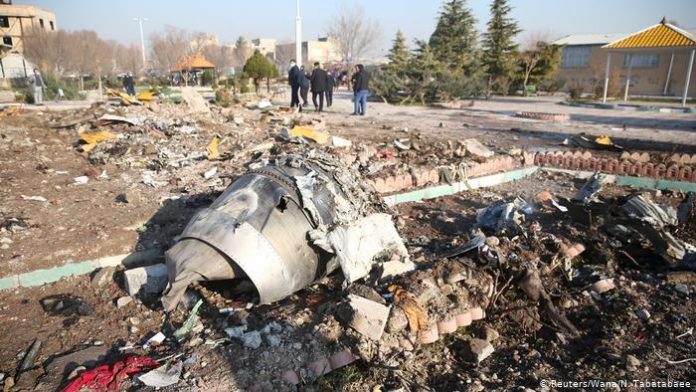 Iran’s admission it “unintentionally” shot down a Ukrainian passenger jet has sparked demands for justice for the 176 people on board who were killed.
The calls were led by Ukraine’s president and the prime minister of Canada, which lost 57 nationals.


The plane was shot down on Wednesday, hours after Iran had struck two air bases housing US forces in Iraq. Ukraine International Airlines flight PS752, en route to Kyiv, came down near Imam Khomeini Airport in Tehran shortly after take-off. Victims included dozens of Iranians and Canadians, as well as nationals from Ukraine, the UK, Afghanistan and Germany.

Those missile strikes were Iran’s response to the US killing of senior Iranian commander Qasem Soleimani. He died in a drone strike in Baghdad on 3 January.
Iran had initially denied reports its missiles had brought down the plane, with one spokesman accusing Western nations of “lying and engaging in psychological warfare”.


Writing on Facebook, Ukrainian President Volodomyr Zelensky demanded that Iran “bring the guilty to the courts”, repatriate the remains of the victims, pay compensation, give total access to Ukrainian officials and issue an apology through diplomatic channels.
Trudeau demanded “transparency and justice for the families and loved ones of the victims”.
UK PM Boris Johnson said Iran’s admission was an “important first step” and called for an independent inquiry.


What has Iran’s military admitted?
The admission came in a statement read on state TV on Saturday morning.
It said flight PS752 had turned towards a “sensitive military centre” of the Revolutionary Guards, the force set up to defend the country’s Islamic system, and had a “flying posture and altitude of an enemy target”.


Brig-Gen Amir Ali Hajizadeh, the Revolutionary Guards’ aerospace commander, said a missile operator had acted independently and alone, mistaking the plane for a “cruise missile” as there had been reports that such missiles had been fired at Iran.


“He had 10 seconds to decide. He could have decided to strike or not to strike and under such circumstances he took the wrong decision,” Gen Hajizadeh said.
Gen Hajizadeh said the military would upgrade its systems to prevent such “mistakes” in the future.
He said he had “wished he was dead” after being told of the missile strike.


What have Iran’s leaders said?
Ayatollah Khamenei said there was “proof of human error” and that he had asked “relevant authorities to take necessary measures to prevent” such an incident happening again.
President Hassan Rouhani said: “Iran deeply regrets this disastrous mistake.” He vowed to prosecute those responsible.


Foreign Minister Javad Zarif apologised to the families of the victims but laid part of the blame on the US. “Human error at a time of crisis caused by US adventurism led to [this] disaster,” he said.