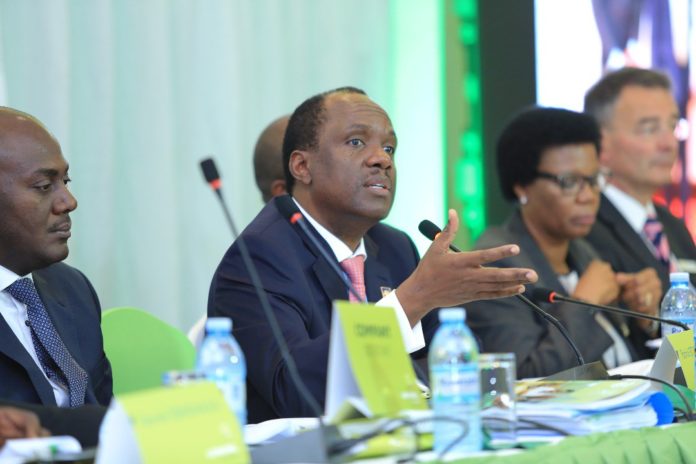 Dr. Martin Aliker, in his autobiography shows a picture of him and his wife at the Olympics games courtesy of being a Board Member of the Coca-Cola Company Africa Regional Office- invitation to all global Coca-Cola sponsored events one his perks as a Director.


In the same book he states that board members are selected not elected. The natural selection of members is based on strength of shares, like UMEME has 10 Non-Executive board members translating into a seat for every ten percentage holding.

UMEME’s Board structure has hardly changed from the Actis days;
1. Patrick Bitature for suppliers since 2007,
2. Gerald Sendaula for the customers since 2013,
3. Florence Mawejje for NSSF recently joined in 2016,
4. Pieter Faling represents the South African interests,
5. Charles Chapman former MD UMEME for Actis since 2009,
6. Stephen Emasu for Actis nominated 2018 and ratified in 2018,


Of the 9 Non-Executive Directors, Actis with 0% or no shareholding controls 5 of the voting Board of Directors! Welcome to Economic hitmen corporate governance model.

Take note! The gimmickry of Independent Directors is overridden by the Director nominating authority.

Breakdown of shareholding, as per page 119 of the UMEME 2017 annual report, in relation to Board voting power:


*Mr Pius Bigirimana’s ratification was for NSSF to fill her proportion of shareholding to Board power.
**Actis and the South African shareholders’ block are on the same page, like Siamese twins enjoined together by their mutual associations with the predatory South African power utility Eskom. These also by consequence hand pick cooperative and useful supplier and customer board representation in similar fashion to Colonial British ‘indirect rule’ modus operandi. Actis/South Africa hold an unassailable majority of 70% of the Board power.


UMEME’s board is so attractive because of: the Director fees to individual members, the Management fees paid out to whoever controls the board (Actis/South Africans) and the obscure performance bonuses which board members most likely partake.

UMEME disregards best corporate governance practice by its deliberate refusal to display Director fees of both sitting allowance and periodic retainer fees in the Annual report under corporate governance section (page 56 of Annual Report 2017) which covers Board performance and remuneration, obviously there is always a reason- ironically darkness is preferred!


As per page 128 under Note 36 on Related parties –UMEME Annual report 2017 shows that a member of Board (Director) earns more than $80,000 in sitting allowances and periodic retainer fees per calendar year.

read:Is Stanbic Bank Uganda board a welfare board?

Actis in the past two years of zero shareholding was gifted 1.1 billion Uganda shillings for the 50%+ firm control of the UMEME Board and management where they managed a consultancy fees spend of 8 billion in the same period!
A single member of the board earns up to 300 million Uganda shillings a year or 850,000 daily, including the 5 Actis representatives, this legal loot would no doubt jolt the trade unionist into hysteria.

read: Who exactly owns UMEME?- contract renewal is as treacherous as treason
There was a performance bonus paid out to the Board and management; in 2017 of Ugx. 6.6 billion and 7.4 billion in contrast to the variance in performance after profit which collapsed spectacularly by 300%! From 138 billion to 35 billion, a show of might from the shareholder delegates who earned a paltry dividend of 19 billion for end of 2017, which begs the question:

Read: Umeme; the Economic HIT-MEN bleeding the economy as the regulator ERA looks on