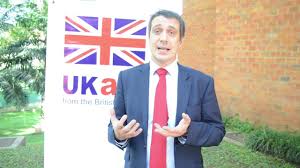 The UK Government has announced its support to the Government of Uganda’s efforts to prevent the spread of COVID-19 disease and to respond to the impacts of SARS-COV-2 coronavirus.
The UK government is supporting Government of Uganda at both national and district levels. We have provided £500,000 to the World Health Organisation to strengthen testing, surveillance and contact tracing, as well as screening at Uganda’s borders.


With a contribution of £167,000 to the World Food Programme, Uganda government has established a temporary screening facility for international arrivals at Entebbe Airport.
‘ ‘The UK recognises the importance of maintaining safe trade routes between Uganda and her neighbours. Through Trade Mark East Africa, we support the ongoing expansion of a regional electronic cargo tracking system and are working to help protect drivers and communities at points of entry and along transit routes. We continue to support the GoU to protect elderly people and refugees; as well as in maintaining learning while schools are closed.’’ Said The Head of Office of the UK’s International Development arm in Uganda, Andrew Ockenden

He adds: Our contribution will help cater for the most immediate public health needs in Uganda to help counter the spread of the virus. The UK has already been a strong and constant international partner throughout the Ebola response and is key player in the fight against malaria. We remain committed to the Ugandan people and are proud to now be able to help in the fight against Coronavirus in Uganda


Since 2017, the UK has invested over £90.5 million in strengthening Uganda’s health system and building the country’s capacity to deliver key public health needs to deal with outbreaks. This includes £7.5 million in the last two years to support Uganda’s preparedness and response to Ebola Viral Disease.