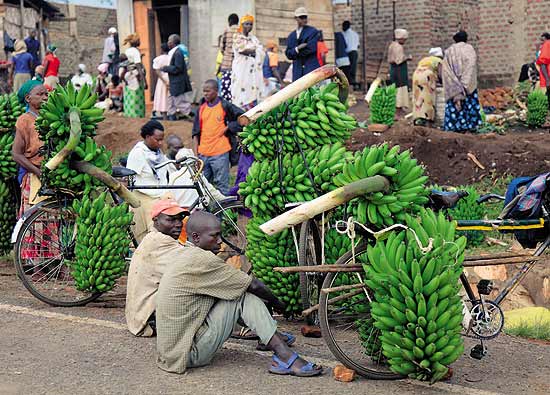 The Annual headline inflation declined for the fourth consecutive month, registering 5.1% in April 2016 down from 6.2% recorded for March 2016.

The continued decline is largely attributed to lower food prices and to an extent prices for energy, fuel and utilities, as compared to a year ago.

Annual food crop inflation declined to minus 4.2% in April 2016 compared to 0.8% recorded in March 2016, driven by falling food crop prices.

Food crop prices, relative to a year ago, have declined since the start of 2016 January and this has been attributed to increased supply to the markets.

Similarly, annual EFU inflation declined from 7.1% in March to 6.5% in April 2016. This was due to the fall in prices of petrol, diesel and kerosene during the month. In addition, there was a 1.5% reduction in the tariffs for electricity consumption.

Annual core inflation, which excludes food, fuel, electricity and metered water, also declined to 6.4% during the month from 6.9% in March 2016.

The decline in core inflation was attributed to a slower rise in prices for transport, recreation and culture as well as communication services, compared to the previous months

Annual headline inflation continued on a downward trend amongst all the EAC partner states, with the exception of South Sudan.

The decline in headline inflation is attributed to a general reduction in food crop prices as well as the recent appreciation of the respective currencies which has led to price decreases especially of imported products.

The Business Tendency Index (BTI) was positive and slightly improving, registering 54.1 in April 2016 up from 53.7 registered for March 2016. The increase is an indication of optimism amongst investors about doing business in Uganda, especially in key sectors of agriculture, trade and Construction and Services. The composite index of economic activity (CIEA) also shows recovery in the level of economic activity from negative growth at the start of 2016 to 0.34% in April 2016.

Similarly, within the month under review, the Shilling strengthened by 1.4% having opened the month at an average midrate of Shs 3,372.3/US$ and closing at Shs 3,325.6/US$.

Besides the weakening of the US dollar against major currencies in recent months, the strengthening of the Shilling was also on account of elevated inflows mainly from offshore players targeting the relatively high yields on Treasury securities in Uganda.

This was coupled with stronger inflows from export proceeds and inward remittances. The figure 2 shows the developments in the monthly average exchange rates between April 2015 and April 2016.

As at the end of March 2016, the total stock of outstanding Private Sector Credit (PSC) had remained unchanged at Shs 11,208 billion, the same level recorded at the end of February 2016.

The growth in the stock of foreign currency denominated credit was mainly attributed to increased demand for short term trade credit to finance imports following continued strengthening of the shilling against the dollar in recent months.

On the other hand, shilling denominated credit has been declining for the last three months mainly due to high lending rates by commercial banks and other lending institutions.

By end of March, the average lending rates had reached 24.4%, up from an average of 21.7% at the start of this Financial Year.

By sector, the building, mortgage, construction and real estate sector remained the largest source of demand for PSC in March 2016, accounting for 23.6% and followed by the trade sector at 18.7%.

During April, there were three auctions of government securities – two for Treasury- Bills and one for Treasury-Bonds. Total issuances amounted to Shs 520.51 billion with Treasury-Bills comprising Shs 333.02 billion and Treasury-Bonds Shs 187.49 billion.

The primary market was characterized by a continued decline in yields across all tenors. The yields edged downwards largely on account of easing liquidity conditions driven by a cut in the CBR from 17% in March to 16% in April 2016.

On a monthly basis, the trade deficit expanded, increasing by 57% to US$ 93.9 million in March from US$ 59.8 million recorded in February 2016. The increase in the deficit is attributed to strong import demand which exceeded exports during the month.

This was on account of a 5.8% increase in the value of non-coffee formal exports due to improved performance of gold exports – which accounted for 14.5% of export revenues during the month.

The increase in non-coffee formal exports offset a decline in the value of coffee exports.

Coffee remains Uganda’s biggest export but its value recorded a 7.2% decline in March 2016 as export volumes reduced as compared to the February 2016. Informal Cross Border Trade (ICBT) exports also registered an increase by 5.5% to US$ 33.9 million in March 2016, driven by improvements in exports of beans and sugar across the region.

This decline is on account of a fall in the price and volume of coffee exports over the year which caused earnings from coffee to decline by 43%.

The international price of coffee was US$ 1.5 per kilogram of coffee in March 2016 compared to US$ 2.2 per kilogram in March 2015. This is due to increased supply on world markets and expectations of bulk harvests in Brazil during the second half of 2016

In March 2016, the COMESA region continued to be the biggest export destination for Ugandan products with a share of 40.3% followed by the Middle East, the European Union and Asia with a share of 19%, 18% and 14.3%, respectively.

The total value of imports (c.i.f) registered a 15.3% monthly increase from US$ 342.6 million in February to US$ 395.2 million in March 2016 driven by higher government and private sector imports. Government imports registered growth of 24.7% over the month with most imports being for project implementation, while private sector imports grew by 15.6%.

The growth in the private sector imports is attributed to the sustained strong performance of the shilling against other currencies which encourages traders to import as well as the normalization of economic activities following the conclusion of the February 2016 general elections.

During March 2016, 46.6% of Uganda`s imports originated from Asia, 16.0% from the COMESA region, 15.7% from the European Union and 12.6% the Middle East. Total imports from Asia amounted to US$ 151 million, of which China and India were the leading contributors.
By country, India remains the leading origin of Uganda’s imports taking a 17.8% share of the total imports in March 2016.