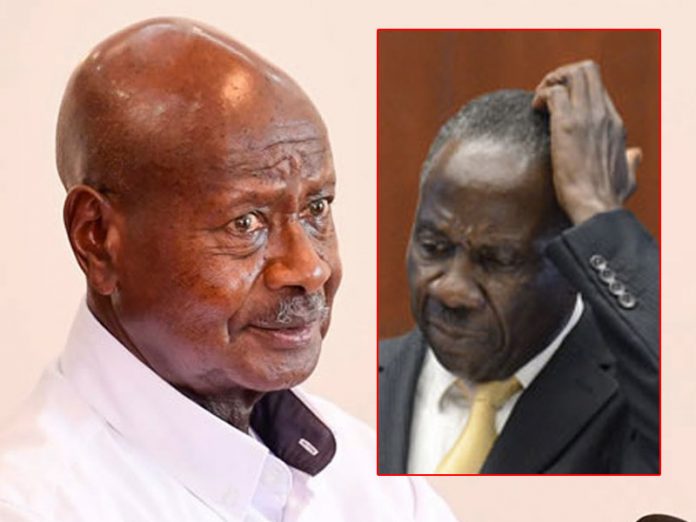 Without external help, Uganda’s foreign exchange reserves will fall to under 2 months of import cover in 2020/21 and leave the country in a vulnerable position, the International Monetary Fund said in a statement issued on Friday.
“Absent external support, the expected deterioration in the current, capital and financial accounts would result in a sharp decline of the Bank of Uganda’s reserve buffer,” the IMF said.
“This would be below the adequate level of reserves for Uganda, and would leave the country in a vulnerable position,” it added.


According to report by IMF, says The pandemic is opening a financing gap of about US$1.3 billion in 2020, of which US$0.5 billion (1.4 percent of GPD) would happen in FY2019/20 and US$0.8 (2.2 percent of GDP) in FY2020/21.
‘’ Absent external support, the expected deterioration in the current, capital and financial accounts would result in a sharp decline of the Bank of Uganda’s (BoU) reserve buffer from 4.4 months of imports in FY2018/19 to below 2 months of future imports at the end of FY2020/21. This would be below the adequate level of reserves for Uganda2, and would leave the country in a vulnerable position. The resources provided by the IMF under the proposed RCF disbursement would contribute to filling the financing gap with financing from other development partners also necessary.

Therefore, IMF says Uganda would respond to the balance of payments shock through a combination of reserve drawdown (with reserves declining from 4.4 to 3.5 months of imports in FY2019/20 and FY2020/21) and external financing’’
The outlook remains highly uncertain. Growth is expected to decline sharply to 3.3 percent in FY2019/20, with several sectors experiencing a slowdown, including tourism, transport, trade, manufacturing, construction and agriculture.
The effects of the shock will continue to persist in FY2020/21, though with some mild rebound expected, so the economy is projected to grow by 3.7 percent.
Despite uncertainties surrounding the near-term inflation outlook—with deflationary pressures competing with inflationary ones—headline inflation is projected at 3.2 percent in FY2019/20, increasing to 4.7 in FY2020/21, with core inflation gradually converging to its 5 percent target over the medium term.


The current account deficit is projected at 10.1 percent of GDP in FY2019/20, due to the sharp decline in exports, income from tourism and remittances, and despite the mitigating impact of declining imports, with some improvement to 8.7 percent of GDP in FY2020/21 . Private sector credit growth is expected to decline to 8.9 percent in FY2019/20 and gradually pick up to support the economic recovery over the medium term
Over the medium term, the outlook is positive, provided the covid-crisis toll is contained and the infrastructure and oil sector investments can proceed as planned

The economy is expected to stabilize and continue growing as some of the large investment projects are completed and start yielding a growth dividend. Growth could reach 9.2 percent with the start of oil production in FY2024/25— though uncertainty given current low oil prices is high.
The oilrelated investments necessary to start production are expected to raise the budget deficit, public debt, and the current account deficit, but these developments would be temporary.
The fiscal position is expected to deteriorate temporarily but the debt would remain sustainable.
The impact of lower growth and tax incentives together with additional health expenditure, social protection and economic stimulus measures is expected to widen the fiscal deficit in FY2020/21.


In FY2019/20, the significantly lower-than-expected externally-financed development spending would more than compensate for the covid-related deterioration in the deficit. Nonetheless, the deficit excluding externally-financed projects and project grants would increase by 1.1 percent of GDP.
Although the debt stock would increase to respond to the emerging financing needs, debt dynamics would remain sustainable and Uganda would remain at low risk of debt distress, with public debt projected to rise above 54 percent of GDP in FY2021/22 and peak at 59.6 percent of GDP in FY2023/24
Overall, risks remain tilted to the downside


The assumptions behind staff’s projections consider the pandemic a temporary shock, from which the global economy and the Ugandan economy would start recovering in the second half of FY2020/21.
If the outbreak proves to be more severe, the fiscal costs could be significantly higher, and the recovery could be delayed. A less favorable external environment could also delay the recovery, causing a slower pick-up in external demand and affecting tourism, remittances, exports and FDI.


Besides the covidrelated risks, the evolution of the oil price is a key risk factor for Uganda as it may contribute to further delay the start of oil production.
Indeed, the already delayed and protracted discussions between Uganda and its oil sector partners to reach Final Investment Decision is not favored by the pandemic and the current low oil price environment3. Furthermore, Uganda is suffering from a locust invasion that could potentially become very damaging. The proximity of the early 2021 general elections also brings considerable uncertainty, which could affect sentiment and economic activity and lead to high spending pressures.