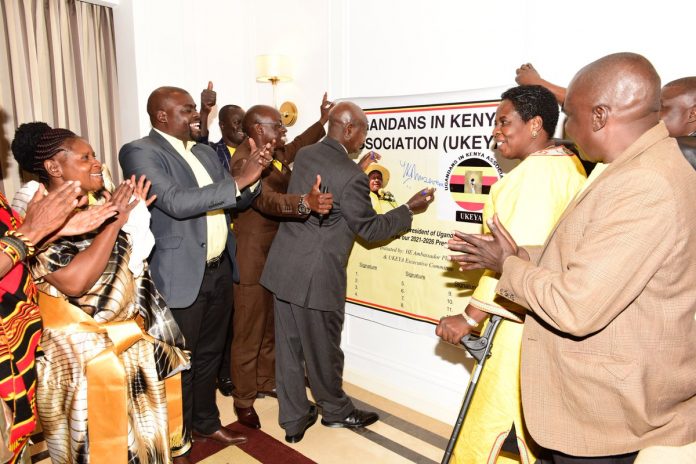 
According to Linda Wamboka Nabusayi , the Press Secretary to The President, President Museveni on Tuesday met Ugandans in Kenya, under their Association (UKEYA) led by their chairman Paul Kyemba and Uganda Ambassador to Kenya Phoebi Otala at his residency at #VillaRosaKempin in Nairobi Kenya.
‘‘They endorsed him for sole candidate 2021’’

Several regions including, Lango, Karamoja, Teso among others have already endorsed President Museveni as sole Presidential candidate for 2021 and beyond.
“Now that God has given us a leader who has ensured that we have tarmac roads, schools, hospitals, etc, we want to tell the people of Kampala to give us a chance to appreciate what government is doing for us. Wait for us in Kampala when we are dissatisfied, we shall find you there and say no,” Simon Peter Aleper, the NRM vice chairperson for Karamoja region said June this year.


‘February this year, The National Resistance Movement, Central Executive Committee (CEC) , The party’s supreme organ among others endorsed President Yoweri Museveni as the party’s sole candidate for the 2021 presidential elections.
The President is in Nairobi to attend the Source 21 COMESA International Trade Fair and High Level business summit at the invitation of his Kenyan counterpart President Uhuru Kenyatta.
The two-day summit which opens at the Kenyatta International Conference Centre in Nairobi under the theme: “The Hallmark of Quality”


Museveni will join presidents Uhuru Kenyatta of Kenya, Edgar Lungu of Zambia and Paramasivum Pillay Vyapoory of Mauritius for presentations on Africa’s development future.
Key on the agenda is the Africa Continental Free Trade Area (AfCTA) which was endorsed by nearly all African countries in March 2018 in Kigali, Rwanda. The AfCTA seeks to progressively eliminate tariffs on trade and drive up investments to the continent and its coverage would make it the world’s largest free trade area.


Uganda signed up to the landmark free trade area which brings together over 1.2 billion people across 55 states, with a gross domestic product (GDP) of $2.5 trillion.