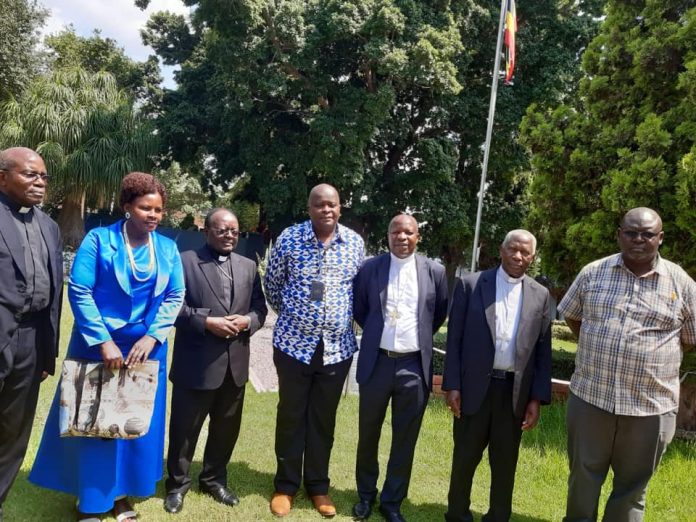 
Msgr Kizito was appointed Bishop of Aliwal North Diocese by Pope Francis November last year.
The chairman of the Uganda Episcopal Conference, Bishop Joseph Antony Zziwa of Kiyinda-Mityana diocese, Kampala Archbishop Cyprian Kizito Lwanga, and Bishop Jumba of Masaka and Bishop Kakooza of Mitiyana. among other priests and members of the laity from Uganda graced the occasion

Who is Msgr. Joseph Kizito?

Msgr. Joseph Kizito is a Ugandan born on the 2nd July 1967 in Rubaga-Wakaliga Kampala. His father is late Charles Nsubuga Kinanina of Masaka Kingo while his mother is Mrs. Babirye Christine Kayaga Nsubuga of Kyengera Nabaziza Kampala. Msgr. Joseph Kizito was born in a family of ten children five boys and five girls, him being the sixth child.


He did his Primary Education in Rubaga Christian Brothers School and in Achilet Banakaloli Brothers Primary School in Tororo where he completed Primary Seven. After Primary education he joined Lubiri Secondary School where he became a very active altar boy. Since he was a day scholar, Joseph Kizito became a very active Youth Leader in his Small Christian Community in St. Antony Sub-Parish, Wakalinga. From this Small Christian Community, he started reflecting about his vocation to priesthood.


After a year of volunteering to clean Rubaga Cathedral which was his home Parish Church and vending in second-hand cloths in St. Balikuddembe market Owino Nakivubo, he joined the Order of the Servants of Mary in Kisonga Mukono, now Lugazi Diocese, and one year later he was sent to St. Augustine Major Seminary Roma in Lesotho where he obtained a degree in Philosophy.


In 1992 after seeing the dare need of Catholic Clergy in South Africa, Joseph Kizito joined the Diocese of Aliwal and took up a teaching post at Maclomes High School while being prepared for Theology studies.

From 1993 -1996, he was sent to St. John Vianney Seminary Pretoria where he obtained his Bachelor’s Degree granted by Urbaniana University in Rome. On the 14th December 1996 Bishop Emeritus Frederick Lobinger ordained him to Diaconate at St Teresa Roman Catholic Church in the Diocese of Aliwal. The following year on 27th September 1997, he was ordained a Catholic Priest for the Diocese of Aliwal North.


As a young priest, he was assigned to St Francis Catholic Church under the supervision of Fr. Jabu Khumalo as the Assistant Parish Priest. During this time, he was assigned the responsibility of starting and strengthening Small Christian Communities with clear pastoral focus of cultivating the spirit of prayer together with the people of God.


On 1st January 1998 until the beginning of 2003, Fr Joseph Kizito was appointed to Mhlanga Parish where he faced the challenge of being the first black Priest to work in a white founded and managed parish. During this time, he felt the need of knowing more about the Missions and decided to pursue postgraduate studies in Missiology with the University of South Africa (UNISA) where he obtained a Master’s Degree in Missiology and another in Theology. He is still pursuing a PhD in Missiology with emphasis on youth sexuality, behavior change and the impact of HIV/ AIDS.


From 2003 he was transferred to Sterkspruit Pastoral Region as a moderator and Priest in Charge, up to 2013. In 2008, the now Bishop Emeritus of Aliwal North, Bishop Michael Wustenberg appointed him to be his Vicar General on the 8th April 2009, which was Holy Thursday; Bishop Michael Wustenberg announced officially that the Holy Father Pope Emeritus, Benedict XVI, had conferred on Rev. Fr. Joseph Kizito and Rev Fr. Franz Aertker the title of Honorary Prelate which is the same as Msgr. In 2013 Msgr. Joseph Kizito as Vicar General was assigned to take Pastoral care for the entire Region of Aliwal North and Parish Priest of Aliwal North Cathedral Parish, with seven extra Parishes that were without a resident Priest.


Msgr. Joseph Kizito has been working tirelessly like this until now when he was appointed as the New Bishop of Aliwal North Diocese, in the Eastern Cape of South Africa. The continues to minister in these extra seven parish churches which are so far apart from each with the furthest being located 120 km from the main parish.


The Bishop elect is preparing himself to lead the Archdiocese which has fifteen main Parishes most of the vacant and hundreds of outstation churches that are far apart from each other. One of the challenges facing the diocese is the lack of vocations to Priesthood and Religious Life.