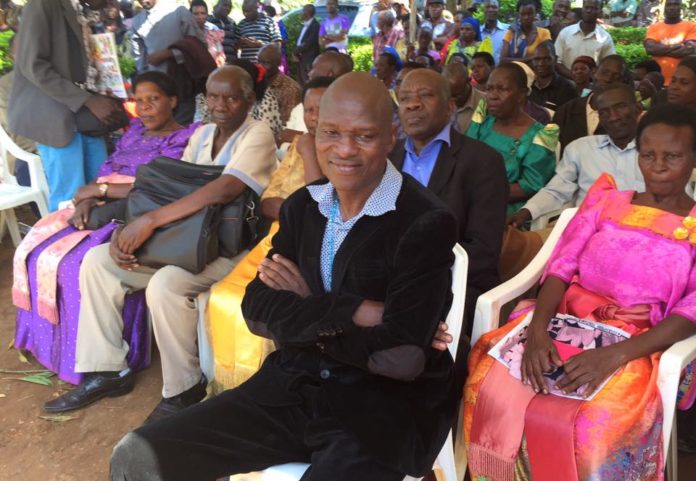 It turns out Prof. Lawrence Mukiibi is more popular in grave than when he was alive. The educationists is said to have fathered more than 90 children and allegedly feasted on students from his schools-St Lawrence Schools and Colleges. Is he the only educationists sexually using students? – grapevine has it that a top educationist in Uganda is no stranger to the vice.
On the many children he fathered, Minister without portfolio, Hajji Abdul Nadduli, had this to say: the late Mukiibi died a hero. According to Nadduli, Mukiibi’s decision to give birth to as many children is biblically and culturally justified.


For those of you who think the late Mukiibi is alone in this league-you’re wrong.
There are a dozen of Ugandan men who have fathered countless children. However, Mukiibi missed one line that he was a role model. Sources say young girls fell in his sex trap courtesy of the bursary scheme that saw many curvy girls study in his schools for ‘free’’ after opening their legs wide.

Too early to crown Mukiibi?

Observers say it is too early to crown the late Mukiibi -champion. Otherwise, there a host of Ugandan men ready to take him on. We bring some men reportedly challenging Mukiibi.


Tamale Mirundi has 48 children?
June Last year, while appearing on Star FM 87.5 radio talk show hosted by Jackson Kisubi, [ He has since abandoned the show ] Tamale Mirundi, revealed that he has 48 children.
The shocked Kisubi had to rephrase the question to ensure he got the man right; To which, Mirundi confirmed that indeed he has 48 children, 15 of whom have finished university education.


Tamale Mirundi has often said he has three homes-literally meaning he officially has three women. In fact, he prefers to call these homes ‘empires’ akin to traditional Kings homes.
What is not clear is whether the 48 children come from his three official women. According to Top Radio 89.6 presenter Omugaga Kamagu, Tamale Mirundi 54, recently turned a Ssalongo, after his side dish, a westerner reportedly related to Prof. Baryamureeba gave birth to twins.

READ: ‘I have 48 children’- Tamale Mirundi

Tamale Mirundi’ first son was born in 1981 after he impregnated a his fellow student at Lubiri secondary School. If it is true, the 54 year, has 48 [ now 50 plus the twins] children, then, the fellow deserves a medal. A simple calculation reveals every year, Mirundi makes sure has a new born.


However, family sources said, Tamale Mirundi official children currently stand at 26. But, how do you deny official figures by Electoral commission boss?-

Sources in Makindye, a Kampala suburb, the home of Goodlyfe Crew have it that singer and Goodlyfe Crew member, Douglas Mayanja alias Weasle is fathering countless Kids.


It is allegedly that younger kids are always dumped at Nerverland, by young mothers who flock his home for rent, medical bills and school Fees.
Unconfirmed sources say some of Weasle’s Kids are abroad where he used to go for shows…!!! Last year, tabloids reported that Weasle’s kids had hit 20 and counting.
In response Weasle said: “I have only three kids and I know them. I don’t have 20 kids like people have claim.” Weasel has dated several city babes and currently dating Samira with whom they have one kid.
Mc Kats – 23 children

Celebrated city events MC and NBS tv presenter is also fighting for the trophy. MC Kats, real name Edwin Katamba, in his late 20’s is said to be the father of 25 children and still counting. The pocket size socialite is currently in love with singer Fille Mutoni.

April 2012, The New Vision reported that a 103-year old Ugandan man died after fathering 158 children and amassing close to 500 grandchildren.
Jack Kigongo from Kateera village fathered his children from 20 wives, with the oldest child being 60-years-old and the youngest being 15, The New Vision, Uganda, reported Wednesday April 2012.

Oburu; 61 children
In 2015, NTV Uganda aired a story of 61 old Ugandan man-Oburu, a resident of Buswikira Village in Mayuge district with an exceptional talent in child bearing.
With a dozen wives, the 61-year-old had fathered 61 children. A simple calculation means, he had fathered more than three every year. “My first two wives are sisters and I married them on the same day in 1968. I also got the others in pairs,” he told NTV news.


Gender Balance
Not to be left out. Women in Uganda have also fielded a candidate. Last month, the Daily Monitor reported Nalongo Muzaala Bana (the twin mother that produces quadruples) real name Mariam Nabatanzi Babirye a resident of Kabimbiri village, Mukono District, is the Ugandan who got married at age of 12 is up to challenge men.


The paper reported that at 37, Nabatanzi has 38 children whom she has delivered from home except the last born who is four months old. She was delivered by caesarean section. Among her children are six sets of twins, four sets of triplets, three sets of quadruples and single births. Ten of these are girls and the rest are boys. The oldest is 23 years old while the youngest four months.
For now, we have decided to postpone the awarding ceremony, otherwise several upcoming competitors seem ready to take on Mukiibi.