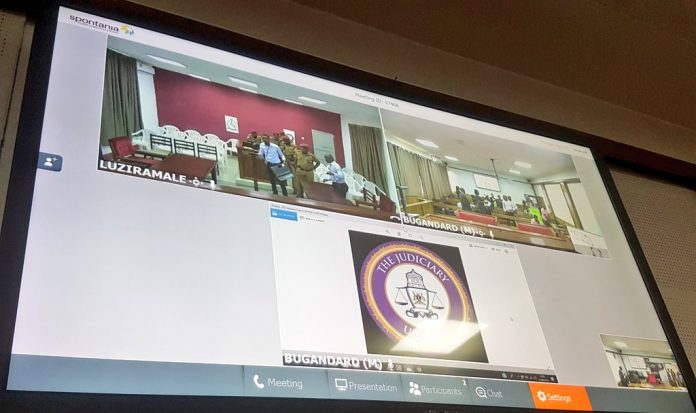 The Chief Justice, Hon. Justice Bart M. Katureebe will today April 15, 2019 commission a video conferencing system to Luzira Maximum Security Prison. The facility will be used for the mentioning of criminal cases before they are fixed for trial.


The Chief Justice will, also operationalize two virtual courts that have been set up within the Luzira Prison complex – one in Luzira Upper Prison Male Wing and another in the Women’s wing (still being finalized).

Hosted at the National Data Centre under the National Information Technology Authority (NITA-U),the high-tech court conference facility was recently installed both in the Luzira Prison and at the Buganda Road Chief Magistrates Court in Kampala.

The technology is designed to aid the mentioning of all criminal cases at Buganda Road Court involving accused persons on remand in Luzira Prison before their cases are fixed for trial.


“We have entered the courts of the future in Uganda,” he said, adding; “Uganda is the first country in East Africa to setup courts inside a prison. Judiciary’s strategy is to revolutionize how justice is dispensed.”
“We are moving courts from buildings to services that are available to Ugandans who need them. With such a facility, people should be coming to the physical courts only for trials,” said Hon. Justice Kiryabwire.

NITA’s Executive Director, Dr. James Saaka, said that facility is designed to connect the courts beyond the geographical boundaries to provide faster administration of justice. He said recordings from all court sessions will be safely kept in the National Backbone Infrastructure at the National Data Centre.


The Officer in Charge of Luzira Upper Prison, Mr Moses Sentalo, applauded the move. “The system will save us the costs involved in the back and forth transportation of prisoners to courts as well as the stress that comes with moving high risk inmates. Imagine transporting one inmate to court requires five prison officers handling different roles: driver, gunman, orderly, warder and supervisor).”
He said a team of Uganda Prisons staff have been trained to operate the facility and they are ready for it.
//// Judiciary Uganda