It was sideways trading for the Uganda shilling. Trading was within a fairly stable range of 3525/35 as supply and demand were evenly matched.

In fixed income space, yields on government paper continued on the downward trend, shedding off a few basis points across the board.
On the fiscal front, signals indicate that the domestic borrowing target for FY21/22 is likely to remain high in line with the fiscal budget that stands at about 9%.

While yields continue to drop, Uganda’s treasuries remain hugely attractive with foreign holdings of up to 10%.

In the global markets, the US dollar held near a three week high against a basket of major currencies after a raft of strong US economic data rekindled expectations of an earlier policy tightening by the Federal Reserve.


Outlook of regional currencies indicate that the Kenyan, Nigerian ,Ugandan and South African currencies are likely to come under pressure next week while Tanzanian and Zambian currencies are expected to hold steady .
In the local market, the mild pullback of the shilling expected, will be largely driven by interbank activity. 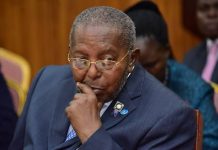