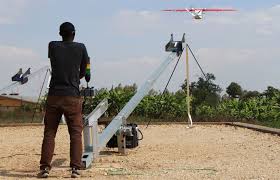 Deaths due to delayed supplies of blood, drugs etc will be a thing of the past come early next year.
A drone service firm is in talks with the government on a deal to deliver blood packages, drugs and medical equipment to public health facilities.


Uganda’s public hospitals often face shortages of essential supplies, such as blood, drugs, syringes, gauze and gloves, sometimes due to unreliable transport through the gridlocked capital or along poorly paved or dirt roads in the countryside.
According to Rueters, drone services firm launched by a Ugandan and a German aims to start a delivery service in March if talks were successful.

“We are trying to provide the products that are needed by the patient and the health worker who is working in the village when that person needs it,” John Goslino, business manager at Flexdrone said.
Local media normally carries stories of deaths of mothers and children due to delayed deliveries.


In February 2016, Rwanda Government hired Zipline Inc- a California-based robotics firm to build the drone port in Shyogwe Sector, Muhanga District – Southern Province in a bid to improve accessibility to blood and emergency medical supplies to remote parts of the country.
Drone has the capacity to travel at a speed of 128km per hour.


The method of transporting blood using drones in Rwanda goes as far back as two years ago. Zipline, the world’s first commercial drone delivery service has over time distributed 7000 units of blood covering over 300,000 km. A journey that would probably take three hours by road has been reduced to six minutes. Rwanda is the first country to make use of this service which has proven to be a lifesaver for mothers and children.