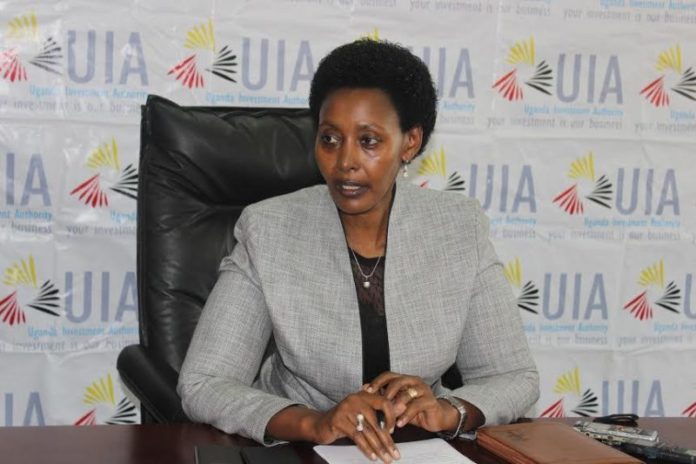 Uganda Investment Authority (UIA) executive director, Ms Jolly Kaguhangire was on Tuesday sent on three months forced leave by Authority’s Board of Directors.
A letter interdicting Kaguhangire signed by UIA Board chairperson Emely Kugonza, lists a number of allegations against her; Abuse of office, insubordination, lying to the board, defying the ministry of Finance and corruption, among others.


The Inspector General of Government, Irene Mulyagonja recently received two letters petitioning her to investigate Ms Kaguhangire. In the letters, the petitioners also accuse Ms Kaguhangire of wrongfully using her powers to manipulate the board in regard to the ongoing restructuring process that started early this year.
In the petition received by the office of IGG on June 20, 2018, the staff also contend that the restructuring at the authority was being taken haphazardly creating a state of fear and uncertainty.

The board in April terminated the employment contracts of five directors and deputy directors in a restructuring process that has activated fear and uncertainty among its employees. The directors and deputy directors were told that their contracts will expire on June 30, 2018.
“In an attempt to discredit UIA staff and management, the ED also embarked on a smear campaign through online platforms. Through her PA she started leaking false information about UIA. She used this method to manipulate the board into agreeing with her that a restructuring was very necessary. It is a textbook technique in change management that for stakeholders to recognise the need for change, the change champion creates a sense of urgency by painting a worse picture than reality,” the petition reads in part.


The petitioners, who signed off the letters as staff of UIA, also accuse Ms Kaguhangire of intimidating the board chairman through an investigation by the Chieftaincy of Military Intelligence, which resulted into the arrest of UIA’s director lands division on account of selling murram and sand illegally.
In the petition alleges that there is a high level of tribalism shown by UIA executive director, Jolly Kaguhangire because she has recruited ‘westerners’ as her personal assistant, executive assistant, and administrative assistant and all the drivers. They further allege that these are paid enormous salaries contrary that salary scales of the Authority.


“She has also brought in a group of interns who mostly hail from western Uganda. This kind of behaviour has led staff to believe that the real purpose of restructuring is to bring in her own people,” the staff allege in the petition.
She is also accused of ignoring advice and attempting to withdraw land from investors, which has exposed the investment agency to litigation and possible loss of money.
Ms Kaguhangire, was appointed UIA executive director in April last year, replacing Dr Frank Ssebowa.