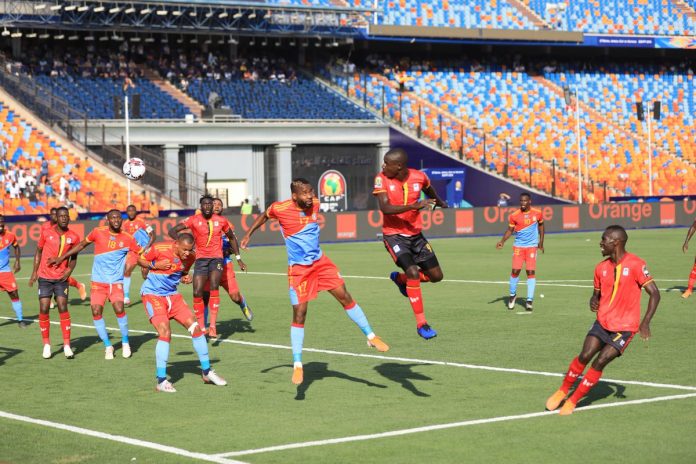 Uganda Cranes went ahead in the first half after 14 minutes when Patrick Kaddu struck.
Faruku Miya provided a brace of assists as Uganda stunned pre-match favorites Democratic Republic of Congo 2-0 in their Group A opening match at the Cairo International Stadium on Saturday.


Miya’s set pieces fell on the heads of Patrick Kaddu and Emmanuel Okwi in either half as the Cranes got off to a flier. The Congolese were not in their usual element and paid the ultimate price for their slow start to the competition in a tough pool that also has hosts Egypt and Zimbabwe.
Goalkeeper Denis Onyango ensured the Cranes went into the break with a goal up, thanks to a brilliant full stretched finger tip save to deny Cedric Bakambu’s curling effort which was headed to the bottom left corner of Uganda’s goal just three minutes to the break.

The Cranes were clearly the better side in the opening half, dominating against the Congolese who seemed to have slowed down on their usual flair and fast paced game.
Uganda doubled their lead when Emmanuel Okwi scored three minutes into the second half to seal victory.
The game was relatively evenly fought as DRC had 11 shots to Uganda’s 13, but five of Uganda’s were on target.
Uganda won the set piece after Marcel Tisserand had deflected an Abdul Lumala cross from the right taking it away from Kaddu who was lurking at the edge of the six yard box.


And just after that goal, Kaddu had two other brilliant chances at goal to extend Uganda’s lead. Three minutes after, he broke the deadlock, Lumala’s cross from the right found him unmarked at the backpost but his bouncing header went inches wide, much to the relief of keeper Ley Matampi who was found flat footed.
A minute later, Matampi who seemed to be struggling on cross balls was forced to work extra to leap to his right and keep away an effort from Kaddu after he had been picked out by a cross from Godfrey Walusimbi.
Uganda were comfortable under the sweltering heat and passed the ball around the park with ease.


The Leopards were limited in their scoring chances and on the half hour mark they had a half chance when a corner was floated to Yannick Bolasie’s direction, but he couldn’t get a clean header on target.

Other than that chance, their other opportunity at goal was early in the game when Bakambu was picked out with a brilliant pass from midfield, but he could not take a strong shot at Onyango with the ball rolling straight to the keeper.


Uganda then doubled their tally just three minutes into the second half, another calamitous piece of defending by the Leopards off a Miya freekick seeing Okwi rise from just outside the six yard box and plant his header beyond Matampi.
Eight minutes later, Matampi redeemed himself with a brilliant save leaping to his right to tip over Miya’s ferocious freekick from range behind for a corner.
DR Congo coach Florent Ibenge made changes, Jose Mpoku coming off for Jonathan Bolingi while Chancel Mbemba was hauled off for Jacques Maghoma, a move aimed at stabilizing a midfield that was dominated by the Ugandans.
With his height, Bolingi provided some fresh problems for the Uganda backline and he had an effort come off the bar in the 70th minute when he beat the offside trap to shoulder the ball above Onyango.


Six minutes on the turn, Okwi sent a stinging pile diver to Matampi’s direction but the effort went inches over.
Uganda will next face Zimbabwe next Wednesday while DR Congo face a hilly task against hosts Egypt who won their opening match on Friday night.
////Caf and other online sources

And it all began here with tactical guidance from @KagutaMuseveni and @JanetMuseveni in Rwakitura. The boys listened. Congratulations Uganda Cranes once more! Now we run over Zimbabwe next. #AFCON2019 pic.twitter.com/8RLnlEMuXM