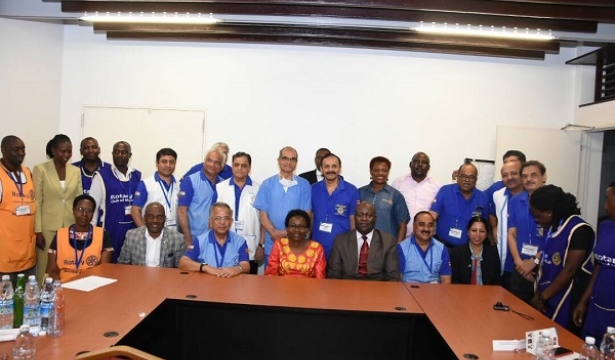 
Senior Scientist in WHO’s Global Hepatitis Programme, Dr. Philippa Easterbook commended Uganda’s progress in the fight against Hepatitis. “We have noted considerable progress in testing, vaccination and the growing awareness on Hepatitis in the country. This shows that as a country, you are on the right track” she said.

Hepatitis B is an infection of the liver caused by Hepatitis B virus. It can be acute and self-resolving or chronic. The Hepatitis B Virus (HBV) is found in blood and bodily fluids. It can be transmitted through semen, vaginal fluids, and blood, and it can pass from a mother to a newborn during delivery. Sharing needles and having unprotected sex increase the risk.


On behalf of WHO African Regional Office, Hepatitis Director, Dr. Lesi highlighted the fact that Uganda is the pioneer country in Africa to carry out mass vaccination against Hepatitis B among adults. “Uganda serves as a model on the global platform for both African countries and the world in its efforts to systematically screen over 50% of its population as well as successfully vaccinate adults against Hepatitis B” she said.


According to the 2016 Uganda Population-based HIV Impact Assessment (UPHIA) Survey, prevalence of Hepatitis B infection among adults stands at 4.3% (5.6% among men and 3.1% among women). The survey indicates that Hepatitis B prevalence is highest in Northern region at 4.6% while lowest in the South West region at 0.8%.