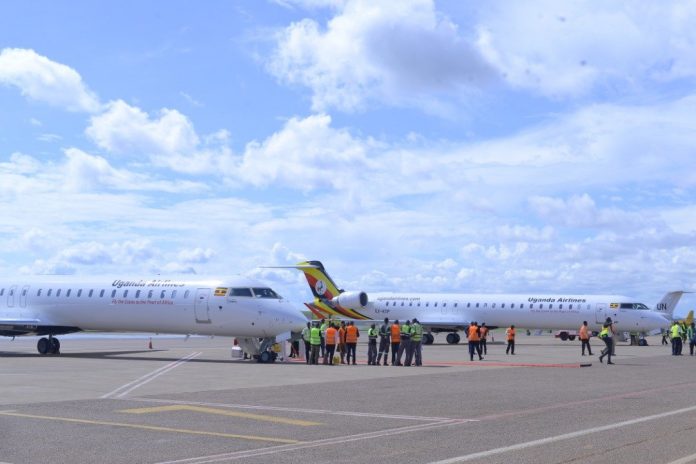 
The Airlines were baptized. 5x-KDP landed at exactly 15:05 hours while 5x-KNP landed five minutes later.
“At Uganda Airlines, whereas we have reached a major milestone today, we still have many rivers to cross. In December 2020 and January 2021, we will be receiving our two Airbus A330-800neo aircraft which will connect Uganda to overseas markets” said Airline’s Acting Cornwell Muleya.

The first batch of two new other aircrafts was received on April 23, 2019 at Entebbe International Airport.
The airline is considering expanding its destinations to include Kinshasa, Zanzibar, Lusaka, Asmara, Hargeisa, Djibouti and Addis Ababa.


Uganda Airlines was relaunched in August, with the country eager to take a slice of the region’s growing aviation business that is currently dominated by mainly Ethiopian Airlines.
Uganda Airlines expects to receive two Airbus A330 Neo planes soon. The first will arrive by the end of the year, and the second a few months later.